The election at the new Senkang Group Representation Constituency (GRC) is predicted by many to be a hotly contested one, with the People’s Action Party (PAP) facing off against WP candidates. The new GRC is made up of the previous Sengkang West SMC and Punggol East SMC, as well as areas from Pasir-Ris Punggol GRC, and will have more than 117,000 voters.

The PAP line-up is a pretty heavyweight one, as it is helmed by labour chief Ng Chee Meng. He is joined by Senior Minister of State for Transport and Health Lam Pin Min and  Senior Parliamentary Secretary for Home Affairs and Health Amrin Amin. Lawyer Raymond Lye is the newcomer in the team.

The WP team, which was announced only on Tuesday morning (June 30), is made up of three newcomers. Only Ms He Ting Ru has contested in the past, in the WP team fielded in Marine Parade GRC in the 2015 GE. She has qualifications in natural sciences and law.

The newcomers are Mr Lim, an economist; Ms Khan, a longtime activist; and Mr Louis Chua, an equity research analyst.

However, despite being newbies, Mr Lim and Ms Khan have generated much buzz on social media, one of the primary platforms for this year’s campaign, because of safe distancing measures to prevent the spread of Covid-19.

Ms Khan tweeted a photo of herself and Mr Lim visiting a household on Monday afternoon, captioning it “Just imagine @jamuslim and I in parliament!”, which has gone over well with supporters.

One wrote: “Would love to see the both of you in parliament!  …. even though I feel sad sad you guys aren’t contesting in Tampines GRC *kri*”

As for Mr Lim, he posted a video of Ms Khan on his Facebook page, in which she shared her experiences with empowering vulnerable Singaporeans. The video clip has been viewed more than 36,000 times.

Mr Lim wrote: “It’s hard to believe that this amazing lady who has already done so much for the marginalized in the community is only in her mid-20s! I am so proud to be running alongside her for elected office.” #makeyourvotecount #workersparty. Ms Khan is the daughter of former presidential aspirant Farid Khan. The freelance digital marketing consultant and social activist is the founder of the Reyna Movement, a non-profit organisation to empower women through community engagement and up-skilling programmes as well as to support refugees. Socially active since the age of 17, Ms Khan was featured as one of the “Changemakers” in Cleo magazine in 2019.

As for Mr Lim, he was featured in several media outlets in March as a possible WP candidate after party Deputy Treasurer Lee Li Lian posted photos of him on Facebook going house to house in a WP shirt. Ms Lee is a former MP who represented the Punggol East SMC, which is now part of Sengkang GRC.

Blk 272A, 272B #Sengkang central House visits that used to occur twice a week has to be ramped up to thrice a week!…

Mr Lim is an academic with impressive credentials. According to his LinkedIn bio, he is “an associate professor of economics at ESSEC Business School, Asia-Pacific, and Chief Economist at the Thirdrock Group”.

Many flocked to the WP Facebook page to support its team for Sengkang GRC. 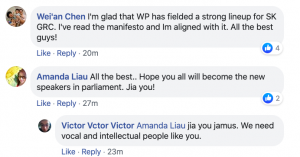