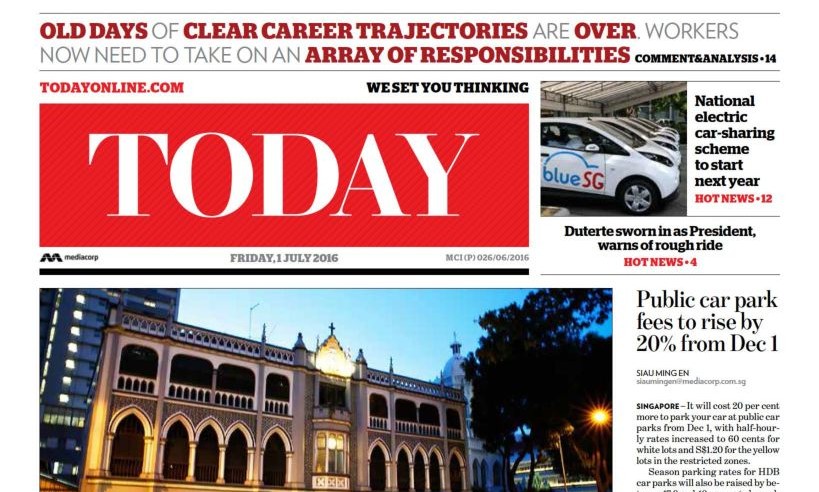 NUS later confirmed that it sought legal advice over an article published by TODAY Online, entitled “Opaque policies, fixation with KPIs, rankings: Why arts and humanities academics quit NUS, NTU”, since it finds that the piece “affected its reputation”.

In an attempt to explain the high turnover rate of academics at NUS and NTU, the TODAY article had interviewed about 10 academics who have either left or are in the process of leaving the top local schools. The article, published on 6 Jan, was taken down from the website on 10 Jan.

Although five of the 10 academics who were quoted publicly asserted that they stand by the comments they made to the publication, TODAY has apologised and has published a statement by NUS on their website.

TODAY’s apology and the decision to publish NUS’ statement on its platform could be part of a settlement deal reached by both parties, instead of taking the matter to the courts.

An editor at the Mediacorp publication apologised for the inaccuracies in the disputed article yesterday and indicated that there were errors in the article since the publication did not seek adequate response from the school:

“TODAY acknowledges that the article entitled “Opaque policies, fixation with KPIs, rankings: Why arts and humanities academics quit NUS, NTU” published on Jan 6, 2019 did not adequately represent the views and position of NUS on the matters reported and included inaccuracies.

“The article reported that NUS and the provost did not respond to the criticisms of the provost by former employees. TODAY did not share these criticisms with NUS or the provost, nor seek their response on them.

“The article also said that there was no information on NUS’ promotion processes on its website. In fact, NUS had earlier informed TODAY that information on NUS’ policy on promotion and tenure is available to all staff in the Academic Staff Handbook, which is accessible on the university’s intranet. We are sorry for the errors.”

In a letter by NUS, published on the TODAY website, the school’s Distinguished Professor and Vice Provost (Academic Personnel) Prof Phoon Kok Kwang reiterated that “Despite clarification being sought from NUS, the article did not adequately represent NUS’ position on the matter, resulting in inaccuracies that can affect the reputation and standing of NUS.”

Asserting that “Ranking is not a performance indicator for the university nor a driver of change at NUS,” Prof Phoon Kok Kwang added:

“The article conveyed the impression that NUS has relentlessly pursued global rankings at the expense of the quality of teaching and welfare of our academic staff, and is arbitrary and irrational in the way it carries out promotion and tenure, which has led to academics from a particular faculty resigning. These allegations are untrue, and were repeated on another Mediacorp platform.

“Our system is not perfect — no system is. But our starting point is to have high expectations of our faculty, and we do our best to have an objective and robust promotion and tenure process. Tenure applications go through three separate committees, and are also internationally peer-reviewed. The criteria for promotion and tenure have remained consistent for many years.”

Read the statement in full here.Follow us on Social Media