The narrowing media space in Singapore 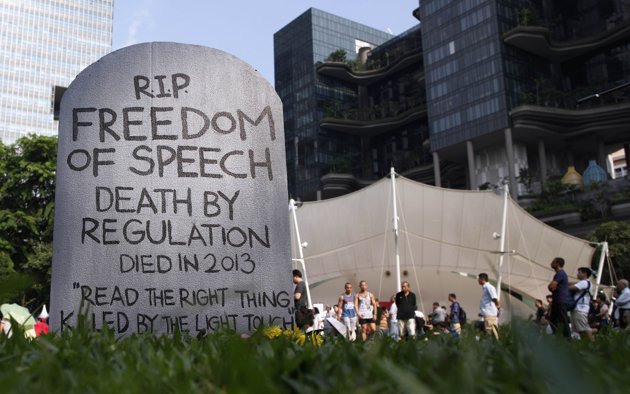 By Howard Lee
Inconvenient Questions closed operations last weekend. As a contributor to the new website, IQ’s closing brings a sense of loss that few might feel, given its limited reach. Nevertheless, for those of us watching the media scene in Singapore, the loss of every website essentially spells a significant loss in what is already a very small space for free expression to flourish.
In Change in Voting, a book written collaboratively by local and international academics about the 2015 General Elections, Zhang Weiyu and Dr Natalie Pang tried to dissect the development and use of media platforms leading to and around the GE.


More specifically about the emergence of new websites, they wrote that the increasing “plurality of voices suggests that more can be heard, more issues may be raised, and more people can rally around a common cause. With these ‘new’ kinds of spaces where online discourse about salient issues can flourish in social networks, online media channels can function as ‘weak publics’, or spaces of deliberation and discourse.”
Similarly, Dr Debbie Goh from the NTU Wee Kim Wee School of Communication and Information pointed out in her study of the knowledge gap during GE2011 that “in an autocratic media system where political information in the mainstream media is controlled in favor of the government, alternative online media played an important role in helping voters gain political knowledge of opposition parties.”
In other words, while online media might not have the quantitative effect on politics, we cannot deny that there is some merit to champion their qualitative effect on enhancing political awareness, knowledge and conversations.

Beyond the political, online media also have an important role in building our understanding of community issues and occurrences. Online media can serve as the community media that our mainstream media have been unable to fulfil. The Middle Ground recently ran an entire series on old shopping malls in Singapore. Part history lesson, part nostalgia-indulgence, such an effort would hardly catch the eye of the casual reader, yet would have been intrinsically meaningful to those who are in search of the Singapore “urban identity”.
The question to ask, however, is whether such efforts are sustainable, or even worth doing in the long term.
The majority of the websites currently still kicking in Singapore’s media sphere depended on an initial tranche of seed funding, mostly from willing and passionate individual sponsors. IQ and Six-Six closed because they were not able to secure anything beyond what the received. Mothership, TMG and The Independent Singapore, too, started on that footing. The Online Citizen depends mainly on crowd funding, which while hearkens to its roots as a grounds-up initiative built on passion and volunteerism, is hardly the way to move forward for building a sustainable platform.

The two websites that are currently in the lead, Mothership and TISG, have somehow managed to defy the odds in their own ways. The commercial element plays a critical part in their survivability, and their distinct mode of operating offers a glimmer of hope for website trying to survive in a competitive environment tilted towards and dominated by mainstream media.
Nevertheless, both Mothership and TISG would have to rely heavily on viewership for their commercial model to work – one perhaps more so than the other. The invariable consequence is the need to produce material that hooks eyeballs more than encourages depth of thought.
That, however, is the not what Zhang, Pang and Goh have outlined for online media. And this is the real danger of what we will be losing in the long term.
In order to maintain their effectiveness as community media platforms, championing weak publics that can influence strong publics, online media first need to find a viable financial footing. They can be, and should be, funded by interested individuals, enterprises or NGOs mixed with self-sustainability through advertising, subscriptions or donations.
The real question is, why has this not happened?
A great part of this might have to do with the regulatory environment, which pays scant regard to the personal privacy of willing individuals and tighten the options available to websites through vague regulations on funding.

But perhaps the greatest blocker is our society. We have grown too accustomed to having “free media for free”. We believe that the death of IQ, Six-Six and The Real Singapore would be met by new contenders. We think that it is too easy to set up operations for an online news platform, never realising that each new online media effort would have to overcome incredible obstacles in sustainable funding, quality manpower and operational cost, just to get their foot to the starting line.
Much as we get the government we voted in, we get the media that we are willing to support and pay for. And for the moment, Singaporeans are not paying for much.
For truly independent media to survive and thrive, more needs to be done. It is one thing to scrap by as a one-man blog show, but an entirely different ball game to run a sustainable media platform to give mainstream channels a run for their money, or at the very least offer themselves as an alternative voice for our community.
The willingness to answer that call comes not just from media owners, journalists and volunteers, but from each of us.Follow us on Social Media