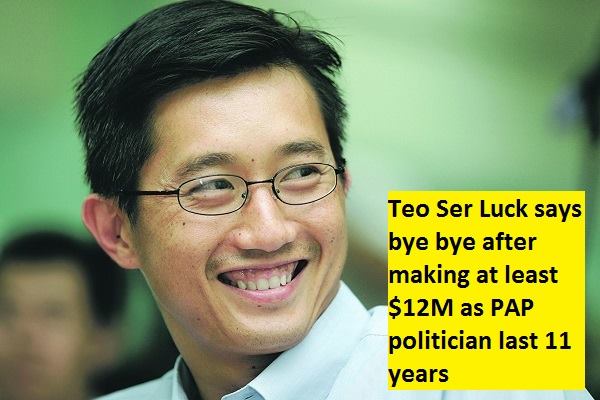 It was announced in the news yesterday (27 Apr) that Minister of State Teo Ser Luck had decided to retire from politics and go back to the private sector.

Teo will relinquish his appointments as Mayor of North East CDC and Minister of State for Manpower on May 26 and June 30 respectively. However, he will continue to be MP for Pasir Ris-Punggol GRC and earn his $16K a month salary.

“I plan to build, create, invest or help start-ups and businesses. Some are tech-related, while others will be in products or services which I’m passionate about. Business aside, I’m glad to continue to serve you as an MP,” he said.

Teo was recruited by PAP to run for MP during the 2006 GE. He entered Parliament via Pasir Ris-Punggol GRC.

During his time as politician since 2006, we can estimate the amount of money he made, using the revised ministerial salaries set in 2012 (salaries before were much higher):

Not bad for an eleven year stint as PAP politician.