However, as the motion was amended at the suggestion of PAP MP Murali Pillai, all 10 Workers' Party MPs voted against it Singapore — Workers’ Party chairman Sylvia Lim has, in an Instagram post published on Thursday (Nov 5), reflected on how her “Justice For All” motion this week was the first she had moved in her 14 years in the House.

Ms Lim was elected to Parliament in 2011 but had spent the previous term as a Non-Constituency MP after earning one of the highest scores among opposition candidates in the 2006 General Election.

The motion, making reference to the high-profile court case of former maid Parti Liyani, called on the House to affirm that “fairness, access and independence are cornerstones of Singapore’s justice system”.

It also urged the Government to “recognise and remedy its shortcomings” to enhance the justice system for all and facilitate a review of the system.

Several WP MPs spoke in support of the motion.

However, People’s Action Party MP Murali Pillai suggested amendments to the wording of the motion. It removed the call for a review of the system and asked the House to affirm the “Government’s continuous efforts” to build a fair and just society.

This led to the WP to argue that its call to action had been reframed as a positive acknowledgment of the Government’s efforts.

Ms Lim had said: “We cannot accept the amendments proposed because they imply that there are no shortcomings in the system, and that there will be no review of the system. As these are key aspects of our original motion, we are unable to support the amended motion.”

All 10 WP MPs voted against the amended motion, which was passed by the majority PAP MPs. WP chief and Leader of the Opposition Pritam Singh said after the vote that the WP MPs wished to have their disagreement with the amendments recorded.

A day after the session, Ms Lim shared a meal with fellow WP MP He Ting Ru, who had supported her motion. Sharing a photo of the duo on Instagram, Ms Lim reflected on how her “Justice For All” motion was a first for a number of reasons:

“After 14 years in Parliament, yesterday was the first time I moved a Motion — on Justice for All. The session ended around midnight, another first.”

Ms Lim, hinting that Ms He was pregnant, added: “I was well-supported by WP MPs and particularly Sengkang MP He Ting Ru. My deepest respect to all expectant mothers!” 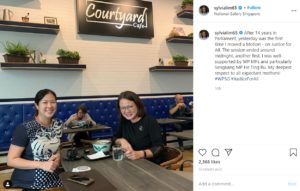