The Independent News
Home News Featured News Swift backlash for netizen who complained about Sengkang MPs being pregnant at...

Asserting that his comment discriminated against working mothers, netizens asked Faizal why he did not complain when ruling party MPs took maternity leave

A netizen who complained about two Sengkang GRC MPs being pregnant at the same time drew swift backlash for discriminating against working mothers, on social media.

On Friday (6 Nov), this publication reported that Workers’ Party (WP) chairman seemed to confirm MP He Ting Ru’s third pregnancy. Sharing a photo of herself and Ms He, Ms Lim commented that she has the deepest respect for all expectant mothers.

Ms Lim’s hint came on the back of speculation that Ms He might be expecting another child after she was spotted  wearing looser clothing and appeared to have a baby bump in photos taken at her constituency and in Parliament. Ms He already has two children with her husband, fellow WP member and ex-elections candidate Terence Tan.

Fellow Sengkang GRC MP Raeesah Khan, the only other female MP at the opposition ward, is also pregnant. The 26-year-old publicly announced that she is expecting her second baby on the same day she was sworn in as MP, in August.

While the majority of netizens responding to the report flooded the comments section with messages of congratulations, one netizen felt that the news was “terrible” since the MPs will be going on maternity leave when they should be serving their residents.

Claiming that the politicians were irresponsible and were trying to get “easy money,” Facebook user Faizal Maidin criticised Sengkang residents for voting the opposition and wrote: “Terrible both of them are leaving the residents for their maternity leaves. The residents have voted for the Wrong Party. What is this? Easy money for them get $16k and then going to give birth. Where are their responsibilities?”

Netizens berated Faizal for expressing such an opinion and speculated that he could be part of the ruling party’s internet brigade (IB). Asserting that his comment discriminated against working mothers, netizens asked Faizal why he did not complain when ruling party MPs took maternity leave: 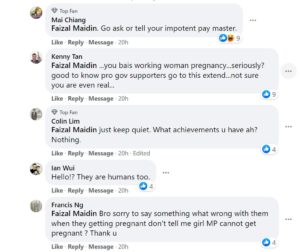 Most netizens, meanwhile, congratulated Ms He and Ms Khan and praised both women for boosting Singapore’s fertility numbers: 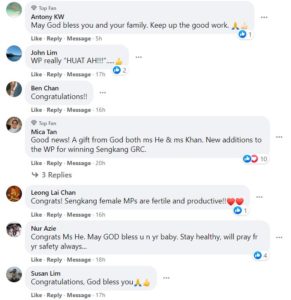