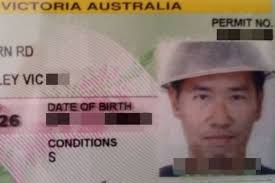 By: Roshni Kapur
A Singaporean man recently wore a strainer on head to pose for a driving license picture in Victoria, Australia. Dan Tang, a volunteer of the Humanist Society (Singapore), did so as a declaration of his ‘Pastafarian’ faith.
Although many ‘Pastafarians’ across the globe have been insistent on wearing a strainer for their driving license photograph, Dan Tang might be the first Singaporean to do so.  He is a long-time follower of the Church of the Flying Spaghetti Monster.
Followers usually wear strainers or colanders on their heads as a religious headdress and call themselves Pastafarians.  The ‘Pastafarian’ faith is practised by the Church of the Flying Spaghetti Monster (FSM), who believe that a flying spaghetti monster created the universe and that pirates were the original Pastafarians. Hence the pirate costume is considered their religious attire that is worn formally.
During an interview with the Humanist Society (Singapore), Tang said that it would be a “funny and lighthearted way to make a stand against teaching Intelligent Design and Creationism in schools in a non-offensive way”.
Tang revealed that the cameraman who was taking his photograph refused to shoot until he provided evidence that “wearing a strainer as a ‘religious’ headgear is not illegal so long (as) the headgear does not cover one’s face”.
There have been other Pastafarians who have had brushes with the law prior to Dan Tang.
In November 2015, Lindsay Miller from Massachusetts, US won a legal case letting her wear a strainer as a religious headgear for her driver’s license photograph.
“As a member of the Church of the Flying Spaghetti Monster, I feel delighted that my Pastafarianism has been respected. While I don’t think the government can involve itself in matters of religion, I do hope this decision encourages my fellow Pastafarian Atheists to come out and express themselves as I have,” Miller was quoted in an online article.
In the same month, Benjamin Ady, from Melbourne was given the right to pose for his driver’s license photograph with a strainer on his head. Across the globe, a Russian man was also permitted to wear a colander on his head to pose for his driving license photograph.
Followers of the religion often wear the strainer to exercise their faith on official government documents.
Pastafarianism is a religion and social movement that came into the mainstream in the US around 10 years ago. The church supreme leader is described on their official website as “a heap of spaghetti appendages with two meatballs and a pair of eyes attached to the noodley body through a pair of stalks”.
While some have dismissed the religion as a parody religion and the church as a spoof church, adherents argue that it offers members the same benefits as other religions.
‘Pastafarians’ have admittedly said that humour is an important part of the church. Their concept of heaven includes a beer volcano and a stripper factory. In contrast, the beer in hell is stale and the strippers have sexually transmitted diseases.
Many university students in European countries have organised meetings and gatherings dressed as pirates as a testimony of their faith.