"This is an urban forest. An Eco Building in Singapore. The first to produce its own electricity with the same waste from the same building," he wrote on his FB page

Located at Clarke Quay, the building’s “hotel-in-a-garden” design has been lauded for its unique architecture that features extensive greenery, including green walls, water features and 15,000 square meters of tiered “sky gardens”.

The hotel’s sky gardens are designed to be self-sustaining and consume minimal energy through the usage of solar cells, motion sensors, rainwater harvesting and reclaimed water.

The hotel has won several design awards in Singapore and abroad since it was opened in 2013. It was also featured on HBO’s Westworld Season 3, a popular science fiction programme.

On Friday (16 Oct), Sir David Attenborough highlighted the unique features of Parkroyal Collection on his Facebook page. Sharing a photo of the hotel, he wrote: “This is an urban forest. An Eco Building in Singapore. The first to produce its own electricity with the same waste from the same building.”

The hotel took notice of Sir David’s recognition and responded, in a comment: “Hi David, thanks for featuring our sustainably-designed hotel-in-a-garden, PARKROYAL COLLECTION Pickering, Singapore!

Over 8,000 netizens liked Sir David’s post. Singaporeans responding to the post thanked him for drawing attention to a building in Singapore and highlighted how green the tiny Southeast Asian nation is: 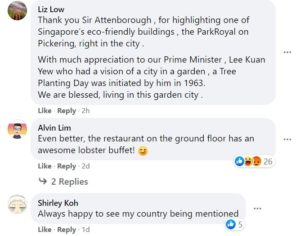 This is an urban forest. An Eco Building in Singapore ?? the first to produce its own electricity with the same waste from the same building …?