Proposed by the Johor state government, the scheme will allow up to 30,000 commuters per day to cross the border using travel passes

It has been about nine months since the land borders between Singapore and Johor were closed for leisure travel in mid-March in a bid to control the COVID-19 outbreak in Malaysia. The Malaysian Federal Government’s decision to keep the land borders closed has greatly affected the hundreds of thousands of people who used to cross over the borders daily.

Malaysians who work and study in Singapore have had to either quit what they were doing in the country or choose to remain in Singapore without being able to see their families. Singaporeans who have family members in Malaysia have also been affected by the border closures – Singaporeans with Malaysian spouses and parents who live across the Causeway have been unable to see their loved ones for three quarters of the year.

The leisure travel ban has also decimated the Johor economy, since tourists from neighbouring Singapore are no longer allowed to make day trips or take vacations across the border.

Meanwhile, the Periodic Commuting Arrangement (PCA) allows Singapore and Malaysia citizens or permanent residents (PRs) who hold long-term immigration passes for business and work purposes in the other country to enter that country for work.

At their meeting on Thursday, Dr Balakrishnan and Mr Mohammad discussed the possibility of a third scheme – the Daily Commuting Arrangement (DCA).

Proposed by the Johor state government, the DCA would allow up to 30,000 commuters per day to cross the border using travel passes that the government would issue every 10 days. Under the proposed scheme, travellers would be able to make around three trips using a pass.

Johor also has plans to step up coronavirus testing to make the DCA more attractive to Singapore and the Malaysian Government and has said that the scheme will be useful to students, workers and families aside from boosting the economy.

In a Facebook post published on Thursday, Mr Hasni said that he told Dr Balakrishnan that Johor is ready to implement the DCA and has the ability and resources to make such a scheme successful.

Sharing that his conversation with Dr Balakrishnan was very meaningful, Mr Hasni said that both men agree that the border should be fully reopened carefully. He added that Singapore and Johor must remain united to face the challenges ahead.

In a Facebook post of his own, Dr Balakrishnan called Mr Hasni a friend and said that the pair have kept in frequent contact throughout the pandemic.

The ruling party politician revealed that they discussed re-opening borders for different groups of cross-border commuters, with the priority on safeguarding public health on both sides, during their conversation.

Thanking Mr Hasni for the unwavering support and cooperation of the Johor state government, Dr Balakrishnan said that Singapore and Johor have worked closely since the pandemic hit to keep supply chains open and progressively restore cross-border travel.

He added: “We also welcomed closer economic ties between Singapore and Johor, through mutually beneficial projects, and spoke about forging closer bonds between the civil servants on both sides.

“Singapore and Johor share deep historical and people-to-people ties, and we will continue to work closely together.” 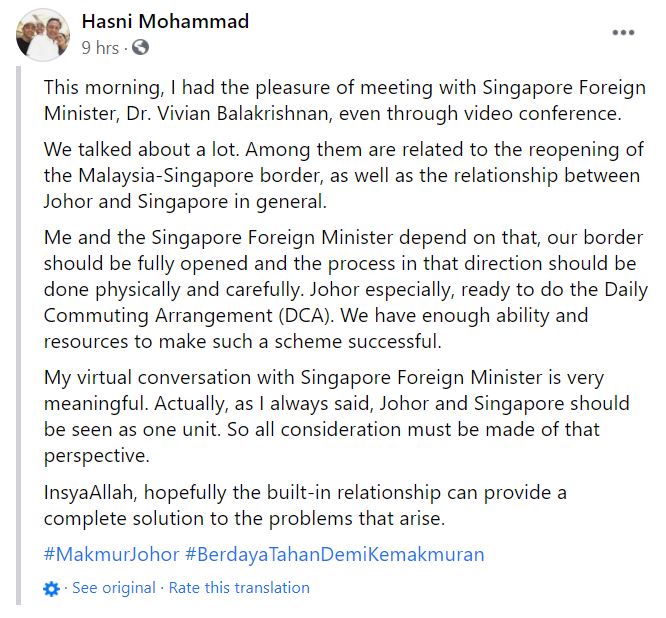