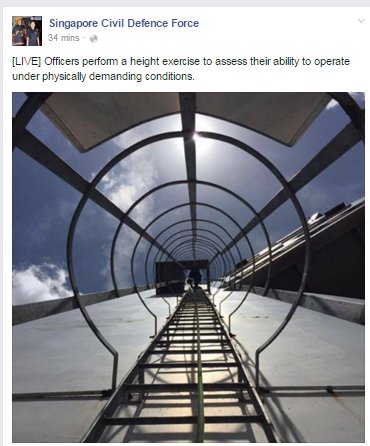 By now you would have heard the story of Nikon’s contest where a photoshopped image won a prize.

Their announcement came under intense criticisms and trolling on social media causing the camera company to put out several clarifications, as well as an apology by the contestant.
Now the Singapore Civil Defence Force (SCDF) has taken a dig at Nikon’s fiasco.
It posted a picture of SCDF Officers performing a “height exercise to assess their ability to operate under physically demanding conditions”.

This is not the first time SCDF had mischievously trolled a viral social media post.
Early last month, they took a dig at an Singapore Armed Forces recruit’s picture:

And posted one of their own.

In SCDF, our recruits look forward to being part of the Life Saving Force. Here's to a fulfilling National Service! 󾟲󾟳󾓦🇬 #ANationofLifesavers #wearbluenotfeelblue