Prime Minister Lee Hsien Loong’s wife, Ho Ching, has shared yet another Lesbian, Gay, Bisexual, and Transgender (LGBT) related post on her personal social media page – this time about how a same-sex penguin couple are raising a ‘genderless’ chick at a London aquarium.

Notorious for flood-posting her page with several links throughout the course of each day, Mdm Ho – who also serves as CEO of Singapore sovereign wealth fund Temasek – shared an article today about how a same-sex penguin couple at the Sea Life London Aquarium have adopted a ‘gender-neutral’ chick that will be classified as neither male nor female.

The Aquarium said in a statement: “(Our) expert care team decided that it would be normal for this chick to be identified as genderless by the team and guests rather than sticking to tradition of naming our penguins at the aquarium as a male or female. Gender neutrality is a human construct but is completely normal in the animal kingdom.”

The TODAY article that Ho Ching shared also talked about how homosexuality is “relatively common” in nature and how “gender classifications are becoming redundant with shared toilets, sexually fluid dating shows and gender-neutral birth certificates creating a more inclusive environment” in the human world. 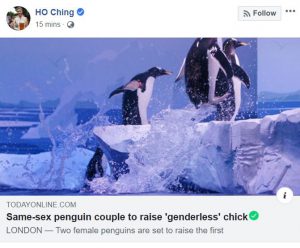 This is not the first time Mdm Ho has posted pro-LGBT posts on her personal Facebook page. Last year, she surprised many when she shared an invitation to the Pink Dot event on her Facebook page, over the Chinese New Year holidays.

Less than one week after she made news for sharing the Pink Dot event page on her social media wall, Mdm Ho made heads turn when she shared an article entitled ‘The colourful origins of the gay pride rainbow flag’ online.

Officially, sex between mutually consenting men is criminalised in Singapore. While Section 377A of the Singapore Penal Code – a British colonial-era legislation – is very rarely enforced here, a man found to have committed an act of “gross indecency” with another man could be jailed for up to two years under Section 377A.

The latest social initiative against Section 377A, the Ready4Repeal campaign, gained immense traction and even drew support from establishment figures like former attorney-general Walter Woon and distinguished diplomat Tommy Koh, but failed to effect change.

In June, PM Lee quashed all hope that Section 377A will be repealed in Singapore anytime soon, as he asserted that the law criminalising gay sex will be around “for some time.”

Many find Mdm Ho’s pro-LGBT posts surprising given her husband’s stance and his Government’s refusal to repeal the law criminalising gay sex.

Prime Minister’s wife shares second LGBT-related post on social media, in the span of one week