Singapore — Prime Minister Lee Hsien Loong has called the Regional Comprehensive Economic Partnership (RCEP) agreement a “major step forward” for the region, with the signing of the free trade agreement (FTA) by the economic ministers of 15 nations on Sunday (Nov 15).

The RCEP is the world’s largest FTA comprising about 30 per cent of global GDP and about a third of the world’s population. The agreement was completed after eight years, since RCEP negotiations were formally launched in 2012 at the Asean Summit in Cambodia.

The RCEP’s objective is “to establish a modern, comprehensive, high-quality and mutually beneficial economic partnership” that builds on existing bilateral Asean  agreements with its FTA Partners and contributes to global economic growth and development.

Minister for Trade and Industry Chan Chun Sing signed the RCEP on the sidelines of the 37th Asean Summit and related meetings with his counterparts from the Asean member states (Brunei, Cambodia, Indonesia, Laos, Malaysia, Myanmar, Philippines, Thailand, and Vietnam) and Australia, China, Japan, New Zealand and South Korea.

The signing was witnessed by PM Lee, alongside the leaders of RCEP participating countries. In a Facebook post published after the signing, Mr Lee said that agreement was completed “after a tough slog of 8 years”.

Positioning the RCEP as major economic development for Asia, Mr Lee said: “This is a major step forward for our region. At a time when multilateralism is losing ground, and global growth is slowing, the RCEP shows Asian countries’ support for open and connected supply chains, freer trade and closer interdependence.” 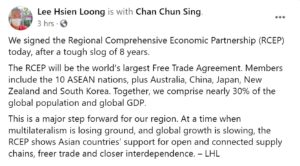 Foreign Minister Vivian Balakrishnan, who also witnessed the signing, made similar comments on social media. He said: “Asean marked a milestone today with the signing of the Regional Comprehensive Economic Partnership (RCEP) agreement, which will significantly enhance Asean’s economic integration with Australia, China, Japan, New Zealand and the Republic of Korea.”

Calling the RCEP the “culmination of eight years of hard work” and a “testament to the value of multilateralism, free and open trade, and connected supply chains”, he added:

“We also rounded off the 37th Asean Summit and Related Summits. We commend Vietnam on its able stewardship of Asean in this challenging year, and look forward to Brunei’s Chairmanship next year!” In a Facebook post of his own, Mr Chan thanked those who worked to bring the agreement to fruition but could not celebrate the signing in person. He said: “My special thanks to all involved who have worked hard to bring us across the finish line.

“While we weren’t able to gather in person to celebrate, I’m glad some of the Singapore negotiating team managed to watch the ceremony virtually, including from overseas, to be part of this momentous event as we finally ink the agreement and seal our efforts over the past eight years.”

He added: “I look forward to the expeditious entry into force of the agreement in order to realise the benefits for our businesses and people.”