Photo of Chiam See Tong and JBJ in parliament recirculates

Both politicians are known for being the only opposition Member of Parliament at one point of time, “with literally the entire opposition camp of politics on their shoulders” 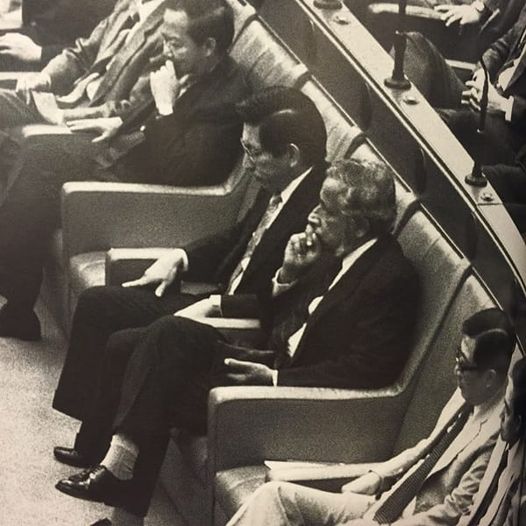 An old photo of opposition politicians Chiam See Tong and J. B. Jeyaretnam (also known as JBJ) made its way round social media on Sunday (Dec 6).

Sharing the photo in a Facebook group titled ‘Concerned citizens band together for a better Singapore’, the netizen wrote: “I was casually on my phone yesterday when I stumbled upon an article on 红蚂蚁, where I saw this photo of two former MPs we all must be so so so proud of and grateful for”.

They wrote that both Mr Chiam and JBJ each went through a few years of being the only opposition Member of Parliament at one point of time, “with literally the entire opposition camp of politics on their shoulders”.

The netizen added that without the two men, the odds for Hougang and the other victories might not have been what they were.

“Even after facing lawsuits, expulsion from parliament and bankruptcy, JBJ returned in GE1997, and almost made it in Cheng San GRC”, the netizen added.

They wrote: “Even after suffering from stroke, and reaching 76 years old, Chiam See Tong did not consider retirement just yet and EVEN went out of his way to move to Bishan-Toa Payoh GRC in GE2011 and attained a rather close and very much dignified loss”.

In 1981, he became the first opposition politician since Singapore’s independence in 1965 to win a seat in Parliament, when he defeated Pang Kim Hin of the governing People’s Action Party (PAP) in a by-election in Anson Single Member Constituency.

He went to participate for the 1993 Singaporean presidential election but his application for the certificate of eligibility was rejected. He died of heart failure in September 2008, three months after founding the Reform Party, which is now led by his son Kenneth Jeyaretnam.

Mr Chiam was the second longest-serving opposition Member of Parliament (MP) after Low Thia Khiang, having represented the constituency of Potong Pasir in Parliament from 1984 to 2011. “We all can never be adequately thankful for them and all that they have done for Singapore” they added, concluding their post. /TISG