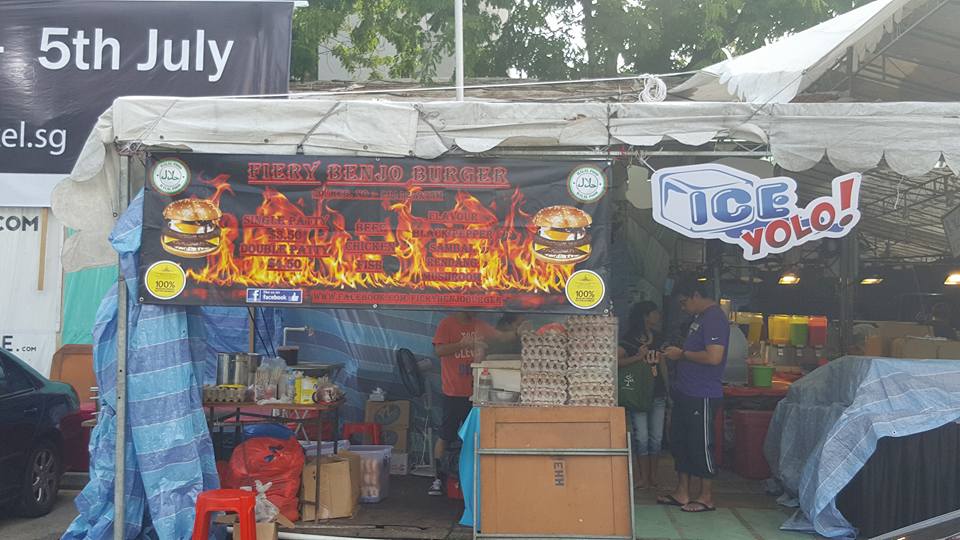 Fiery Benjo Burger, a local food entrepreneur who leveraged on social media to drive traffic to their stalls at several pasar malams in several places in Singapore, has called it quits. The burger-joint said that pasar-malam organisers choosing Chinese food vendors over others is the reason for their folding.
The food enterprise said in their Facebook page that they had been paying the organiser daily but that the organiser decided to “chase” them out during the peak period of Ramadan, when business is most brisk.
“So we would like to announce that we have closed all our 4 outlets which is, Causeway Point bazaar, Chua Chu Kang bazaar, Malay Village bazaar and Tanjong Katong Complex bazaar,” Fiery Benjo Burger said.

Fiery Benjo Burger said that the organiser invited them to open their stall at Geylang and that they opened it last Sunday. But when the organiser saw the crowd at the burger joint, they asked for $6,000 rental. The organiser allegedly told the burger-joint that they can leave if they don’t want to pay as there are others who would take over the stall.
Facebook user Jamilah Lim asked the food entrepreneur: “So basically you couldn’t pay the organisers the daily amount of 6K, so why is this now a RACIAL issue? Also, you made a VERBAL agreement to rent, did you record it down? Thirdly, why close down all your other profit making shops just beacause of one area? The first thing about business is that you protect your interests. Why suddenly got chinese blaming one?”
To which the burger-joint replied: “Its not daily 6k. He asked 6k within 1 day or ask us to move out.”
—
Update as at 26 June 2016, 5.40pm – Fiery Benjo Burger has deleted their Facebook post.Follow us on Social Media