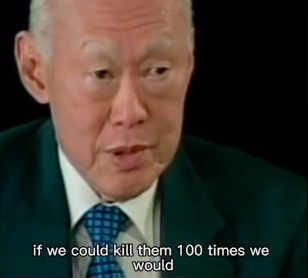 Following Wednesday's execution of Malaysian drug trafficker Nagaenthran Dharmalingam, old video clips of Mr Lee being interviewed about drug trafficking and the death penalty in Singapore have been trending.

Following Wednesday’s execution of Malaysian drug trafficker Nagaenthran Dharmalingam, old video clips of Mr Lee being interviewed about drug trafficking and the death penalty in Singapore have been trending.

Nagaenthran, 34, was hanged for drug trafficking despite many challenges to his conviction and appeals for clemency on the grounds that he had an intellectual disability. He had been on death row for more than a decade for trafficking 42.72gm (1.5 oz) of pure heroin into Singapore.

His high-profile case has drawn interest from supporters and opponents of the death penalty. Amidst this, video clips of the late Mr Lee have popped up. They look to have been extracted from his interview on BBC’s HARDtalk programme.

In the hard-hitting interview, Mr Lee was asked about Singapore having one of the highest rates of capital punishment in the world. Singapore law prescribes the death penalty for those caught with more than 15g of pure heroin.

“If we could kill them a hundred times, we would.”

So said Mr Lee in an interview with Tim Sebastian, who was then the BBC’s anchor for its long-running HARDtalk programme.

The videos do not carry a date but current HARDtalk anchor Stephen Sackur took over in 2005, which means the interview was conducted some 17 years ago.

“It’s terrifying to see because you are then drug dependent, you steal, you cheat, you rob your own parents. I mean, it’s so destroying. And they come in knowing that death if they are found with this goods on them, but the rewards are so great. And they try.

“Without capital punishment, our transhipment rate as a drug centre would quadruple or quintuple.”

Another Malaysian man, Datchinamurthy A/L Kataiah, is on death row, awaiting execution for drug-related offences. A legal challenge has been filed and is scheduled – to be heard in court in May. But his execution is set for Friday, April 29. /TISG

Paul Tambyah, Alfian Sa’at, among those slated to speak at vigil for Nagaenthran & Datchinamurthy, who are scheduled for execution later this week