Singapore — Since news broke last Thursday (April 8) that Deputy Prime Minister Heng Swee Keat would step aside as leader of the People’s Action Party’s fourth-generation team, speculation has been rife amongst netizens as to who would be the next Prime Minister.

As PAP second assistant secretary-general, Mr Chan, 51, is Mr Heng’s chosen deputy, and, if the chain of command is followed, the most likely to take over.

However, netizens seem to disagree, having started a petition against Mr Chan for PM on Thursday (Apr 8).

The petition, titled ‘Say NO to Chan Chun Sing for PM!’ garnered over 5,000 signatures in three days.

It was started by an anonymous account ‘Singaporean First’ on change.org.

The petition reads: “DPM Heng has stepped down from his position as the leader of PAP 4G team and he will not be PM-designate hereon. Our worst fear is that PM Lee will push Chan Chun Sing for the position again, which will be disastrous for Singapore”.

“If you too cares for our political future, please sign this petition to voice our concern, and persuade PM Lee not to put up Chan Chun Sing”, the petition said.

Some of those who signed the petition gave their reasons for doing so and opined that Mr Chan lacked empathy and humility.

Others also felt that Mr Chan spoke down to the common man.

On the flip side, on Friday (Apr 9), another group of netizens started an opposing petition, ‘Say YES to Chan Chun Sing for PM!’.

Since its inception, the petition garnered 848 supporters.

“Few people know that he was inducted into the hall of fame of the United States Army Command and General Staff College considered by many as the intellectual centre of the US Army”.

It added: “Mr Chan excelled as a student at the US Army Command and General Staff College in 1998, and was the first foreign student to be conferred the ‘Distinguished Master Strategist Award’ in the same year.

Like the rest of the PAP Ministers, he serves Singapore with his whole heart and soul, putting Singapore and Singaporeans’ interests first”.

A number of those who signed drew on their personal experiences and interactions with Mr Chan and cited those as reasons for supporting him. 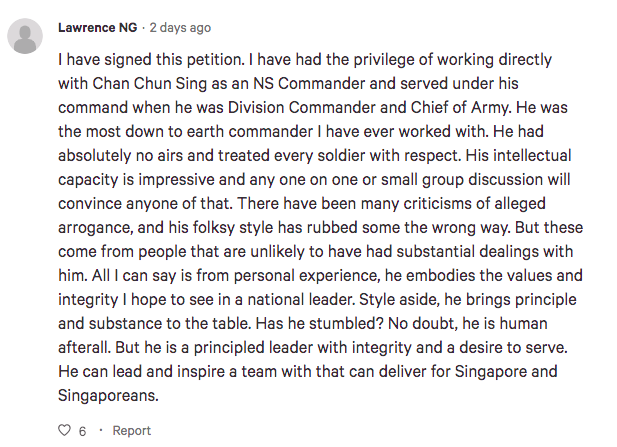 Having seen both, which petition are you going to sign? /TISGFollow us on Social Media