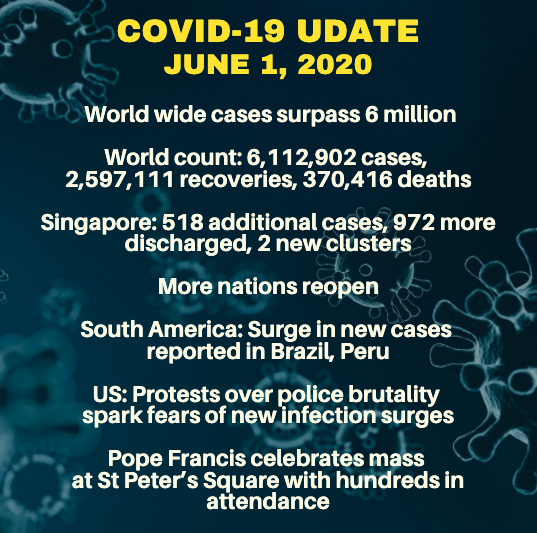 2,597,111 people worldwide have recovered from the coronavirus.

The Ministry of Health (MOH) said on May 31 that there are 518 new Covid-19 cases in the country. Singapore now has a total of 34,884 confirmed cases, with an additional 972 discharged from hospital. A total of 21,699 individuals have recovered, and 23 have died.

One new infection cluster has been announced at a dormitory at 15A Senoko Way.

Of the active cases, 374 are in hospital, with seven in intensive care, while 13,242 are in community facilities.

While the number of coronavirus cases continues to grow worldwide, more and more countries are easing restrictions in order to boost their economies.

Greece—will be allowing flights from all countries to boost tourism starting from July 1, following the opening of the country to 29 nations from June 15 to 30.

UK—From Monday (June 1), more stores will open and small groups will be allowed to meet. Professional sports are set to resume as well, though under health protocols.

Norway & Denmark—Leisure and business travel is opening between Norway and Denmark.

South Korea—Bars, gyms and restaurants reopened but are required to keep a QR code-based customer log from June 10 onwards. The data gathered will be erased after 4 weeks to safeguard clients’ privacy.

South America may be the new coronavirus hotspot as infection numbers keep climbing, especially in Brazil and Peru. In Brazil, which now has over half a million infections, 16,409 new cases were reported in the last 24 hours, as well as 480 deaths. Peru saw an additional 8,805 cases within a day, as well as 135 new deaths, making it the Latin American country with the second-highest number of cases (155,671).

According to the director of the Pan American Health Organization, Dr Carissa Etienne, the Americas have “become the epicenter of the Covid pandemic.”

As at least 75 cities in the United States have staged protests over the killing of George Floyd while in the custody of Minneapolis police, officials are concerned that this may set off new chains of transmission of the coronavirus, especially among communities of colour, already disproportionately affected by Covid-19.

“I’m extremely concerned we are seeing mass gatherings. We’re going to see the other side of this in a couple of weeks,” said the Mayor of Atlanta, Keisha Lance Bottoms. Protesters have been urged to take safety precautions, with authorities warning that the US is not over the pandemic yet. The widespread demonstrations may affect the reopening of cities as well, as several officials are considering delays to the scheduled lifting of lockdown restrictions.

For the first time in three months, Pope Francis celebrated mass at St Peter’s Square in the presence of several hundred faithful Catholics. Those who gathered wore masks and were tested for fever before being allowed entrance. Pope Francis appealed for health care especially for the poorest in the world, giving mention to individuals infected with the coronavirus in the  Amazon region of South America.

He said “People are more important than the economy,” and that he hoped that people would “have the courage to change, to be better than before and to positively build the post-pandemic world.”

The Pope blessed those who are gathered, and added, “You know that from a crisis like this, you don’t come out of it the same as before. You come out either better or worse. The human family needs to come out of this crisis more united and not more divided.“ —/TISG

Read also: Curfews and clashes as US race protests escalate