Misdeeds of some are reprehensible but not beyond redemption 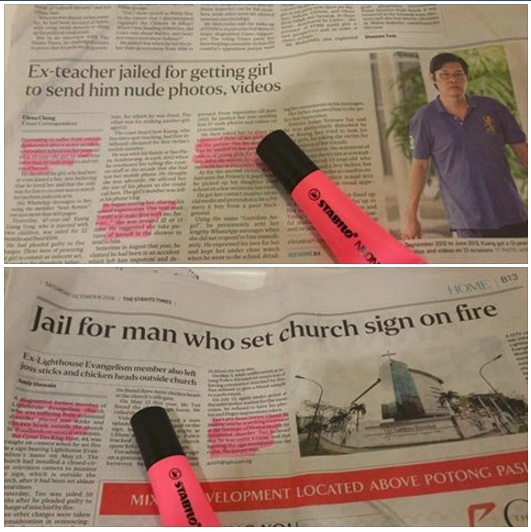 When a disgruntled ex-member of a megachurch placed three chicken heads, joss stick and burnt candles in front of the church sign and later set the sign on fire to remove a self-perceived curse, you can understand – somewhat – because it is reported in today’s news that he is “seeking treatment at the Institute of Mental Health for delusional disorder.” It costs the church $19,020 to repair the sign and Mr Cyrus Teo 10 months in jail for mischief by fire.

But in another segment of the papers, what Mr Kuang Liang Yong had done is difficult to understand – more so because there is no report that he is suffering from some forms of mental illness. These are his offences.

In 2012, the married Mr Kuang, 47, with two children of his own met his 12-year-old victim at Sun Plaza. She was in the arcade when she lost her phone. So, Mr Kuang lent her his. From there, it was downhill all the way.

He “began texting her, sharing his sexual experiences.” One of the texts reads: “i want u to make love with me, forever…” Then, from sending messages, he degenerated into requesting for personal nude photos of the 12 years old. At first, he asked her to send him photos of her in the shower.

From there, Kuang became more “creative” and spun a tall tale about an accident and told her that it has left him impotent and depressed.

From Sept till June 2013, he pleaded with her to send 57 nude photos of herself and she did so under pressure. He then asked her to share the his numbers with three of her girlfriends with the intent of persuading them to send nude photos of themselves to him. He told her that he needed the photos to cure his impotency. The audacity of Kuan is surely beyond understanding for me.

When the girl refused to give him her friends’ number, he broke off with her in December 2013. And that’s not all. He started looking for his second victim and found a Primary six pupil from his daughter’s school.

From there, he stalked her. He called himself “Guardian Angel”. He persistently sent her messages to tell her he loved her deeply and madly. His MO was to ask her to do the same with his first victim, that is, send nude photos to him.

But fortunately the girl’s father reported him to the police and he was arrested. The pervert’s scheme was thankfully averted.

Lesson? Just one. While I understand that every man (and woman) makes mistakes, falls, make amends and is redeemable, I am compelled to say that for some, their misdeeds are not just reprehensible, they are also beyond my limited comprehension.

The unwell is sick and their behavior sadly follow suit because in most cases, they can’t help themselves. But what do you say to the certified well, that is, those whose egregious acts are committed with almost full volition and deliberation, but with little or no reflection, compunction and inhibition.

Now, being forced by a delusion of a curse to burn down a church sign for deliverance is definitely and categorically different from someone like Kuang who knows full well as a father, husband and ex-teacher that his intentions, elaborate plans and conscious actions would not only invite penal sanction, but it would also be morally, emotionally and unconscionably repugnant, repulsive and condemnnable.

Alas, there is a lot of things in this world that is unspeakable – morally and mentally. The savage deeds of men are sometimes indistinguishable from what we would unreservingly label as evil.

But let me caveat that acts that are beyond comprehension are not beyond redemption. For I am always reminded in my own failings what CS Lewis once said: “To be a Christian means to forgive the inexcusable because God has forgiven the inexcusable in you.”Follow us on Social Media