Malaysia is 3rd laziest country In the world: Study 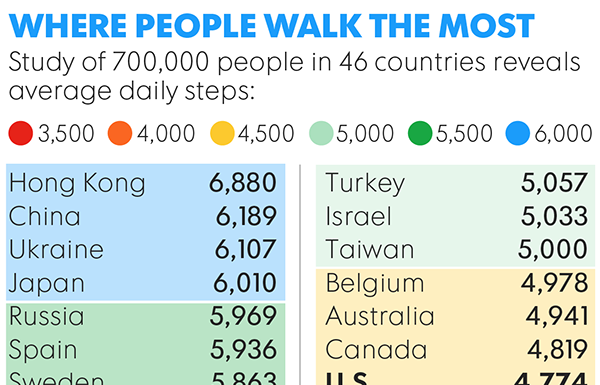 A study showed that Malaysia is the third laziest country in the world!

According to a new study conducted by Standford University, Malaysians walk an average of 3,943 steps a day.

But compared to Hong Kongers who walk an average of 6,880 steps a day, the Malaysian average does not seem much.

The study was conducted using step-counters installed in most smartphones to track the walking activity of about 700,000 people in 46 countries around the world.

Scott Delp, a professor who co-led the research, said that “the study is 1,000 times larger than any previous study on human movement.”

Standford researchers also noted that people typically walked a similar amount every day in countries with less obesity. However, there were larger gaps between those who walked a lot and those who walked very little in nations with higher rates of obesity.

“If you think about some people in a country as ‘activity rich’ and others as ‘activity poor’, the size of the gap between them is a strong indicator of obesity levels in that society,” Delp explained.

In our opinion, Kuala Lumpur is not as walkable as cities like Seoul, Hong Kong, and Tokyo. So the result is pretty unfair, don’t you think, asked Hype.my.