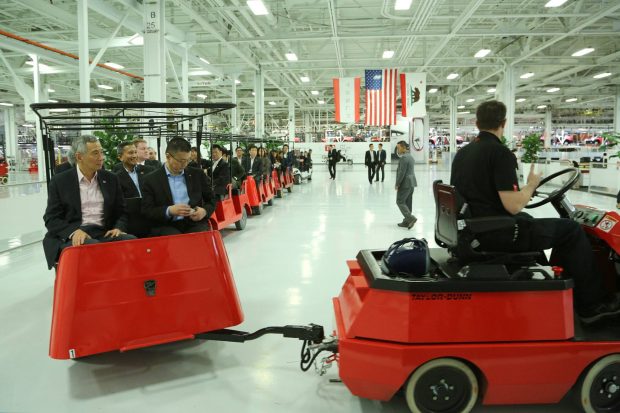 Earlier this month, Prime Minister Lee Hsien Loong in speaking at the Institution of Engineers’ Singapore Golden Jubilee Gala Dinner said that Singapore was “built on the backs of engineers”. He further said that his Government was working hard to build up Singapore’s engineering talent and capabilities.

In explaining how his Government is “trying to also attract back home some of our good engineers who are abroad,” he also said:

“In February, I was in Silicon Valley and met many Singaporean engineers based there who are in the top tech companies – Facebook, Google, Dropbox. In all the firms you find some. And they are not there because of the pay or the environment, but because they have something exciting to do and they hope to change the world. I am heartened that they expressed keen interest in what we are doing in Singapore and some have taken up our fellowships to come back for a few months, do a specific project, and hopefully find it congenial and I hope stay on longer than they planned.”

While the Government has been trying to attract engineers who are overseas to come back to Singapore, a number of engineers have been struggling to find gainful employment locally.

A support site for retrenched or unemployed Singaporean PMETs (Professionals, Managers, Engineers and Technicians), Transitioning, has published a letter from a local computer science graduate who has been unemployed for about 6 months, saying how he had been bypassed for employment at a multinational company because the company decided that it was cheaper to hire a foreigner for the job.

He said: “Three weeks ago I got an interview from a MNC through a HR (human resources) friend who posted the job on jobs bank. And early this week, my friend told me my application was rejected because they have chosen a foreigner who has similar experience but his salary requested was 30% lower than mine.”

The unemployed person said that he was shocked that this happened despite the Fair Consideration Framework being in place to protect local job-seekers. His friend in the MNC’s human resources department further told him that advertisement in the Government’s Jobs Bank is publicly viewable “so employers put in the information such as email and contact number and that is why foreigners can call and email them about the job vacancy.”

He claimed that a quick check by him revealed that a lot of the “overseas agencies are using this as a opportunity to get foreigners to pay and apply job on their behalf.”

Former Chief Economist of the GIC, Mr Yeoh Lam Keong, has commented on the predicament of this unemployed professional. Linking the Transitioning article to his Facebook, Mr Yeoh said:

“Want to know the real underlying economic reason why we face a shortage of good Singaporean engineers and IT professionals?

Because we have been far too liberal in importing cheaper regional engineers and IT staff for over 2 decades. This has bid down the real wages and working conditions of such professions such that the return on investing in such a tertiary education and career is unattractive to locals.

20-30 years ago, some of the the best and brightest sought to study engineering. Now it’s become one of the last choices. You can’t blame our locals. It’s simple labour market economics and rational human capital choice.

But it’s had a huge negative long term impact on local industrial capability compared to other economies like Germany, Switzerland or Japan where good engineers still command a labour market premium and engineering continues to be a highly respected profession. They continue to lead the world in precision engineering and innovation.

This is also reflected in declining local engineering standards in the public sector for example, the SMRT and public housing lift maintenance as well as in the lack of private sector development of specialist engineering products and services. Why upgrade to these activities when we can do quicker operations based on cheap engineering labour and products?

It’s also created a vicious circle where high end engineering firms now find it difficult to locate In Singapore unless they can hire foreign engineers.

And our leaders bemoan the shortage of good local engineers ? Sigh**

It will take a decade of properly stringent professional immigration policy combined with the right industrial and education policy to fix. But fix it we must.”Follow us on Social Media