Home News Jo Teo has an unusual understanding of procreation

Jo Teo has an unusual understanding of procreation 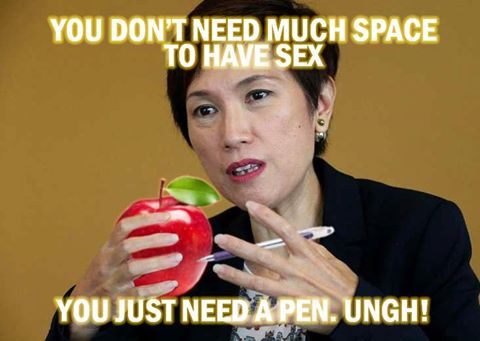 Wow, the Senior Minister of State certainly has an unusual understanding of procreation. Instead of just owning up to the fact that the government is unable to supply flats to everyone and needs to come up with a framework of prioritisation, Josephine Teo has decided to wade into the bedroom habits of Singaporeans. A chance to meaningfully discuss how to best boost the birthrate in Singapore has been trivialised into a banal debate on sex!

Whether Ms Teo is speaking from personal experience or not, she has generalised the act of sex on so many levels.

Firstly, she seems to have forgotten that sex (in most cases) is not just a clinical event. What of romance, setting, ambiance and feelings? To boost the birth rate, shouldn’t the atmosphere that would lead to sex and procreation be understood and facilitated? Sex set in a loving relationship is after all a process and not just a singular act in a confined space. The Singapore government has always preached its pro family stance. By reducing sex to some kind of quickie in a tiny space surely runs contrary to that stance. Has Teo not contradicted the government’s standard position on such “family” matters?

Secondly, she has misguidedly trumpeted narrow minded generalisations in relation to the moral values of East and West. While comments such as these may be parroted in private by ignorant people, I (reasonably) expected much more from a member of government who is a minister no less!

“In our case, man meets woman, man falls in love with woman, man proposes to woman, they then plan the wedding and do the house… In France, in the UK, in the Nordic countries, man meets woman, tonight they can make a baby already. They love each other. Both of them partly have their own family, so it is a matter of living in yours or living in mine, and they also don’t have to worry about marriage – that comes later”

Not all Singaporeans are so prude and not all Europeans are so sexually liberated. If what Ms Teo has so broadly assumed were true, why are there marriages in Europe and why are there children born out of wedlock in Singapore? This kind of logic seriously knocks the credibility of Ms Teo and by reference, the government!

Personally, it is rather alarming that this new policy suggestion may have been made based on certain assumptions that may not be entirely accurate.

More fundamentally and related to the issue of HDB flats is the treatment of unmarried parents, divorcees or widows / widowers in this instance. What of someone who got divorced while expecting a child? Will he or she not be deemed to require space? The same question applies to widows / widowers. What of children born to parents who may not be married? Does their need for space not count?

The HDB scheme in its entirety is funded by taxpayers which includes all segments of society regardless of marital status. While I understand that the government wants to increase the birthrate in Singapore, it needs to do so in a way that is not so blatantly prejudicial to so many levels of taxpayers. This scheme should be open to any Singaporean who has children and has sufficiently proven that they need space. It should be on a needs based basis as opposed to restrictive limitations of “first time married couples with a child below 16 or is expecting a child”.

In fact, I would argue that schemes such as these go against the very grain of what constitutes a successful relationship and family life by needlessly pressurising people who may not be ready for the responsibilities of family life to get married and have children just to have a space to call their own. How is this healthy for relationships or the family unit?