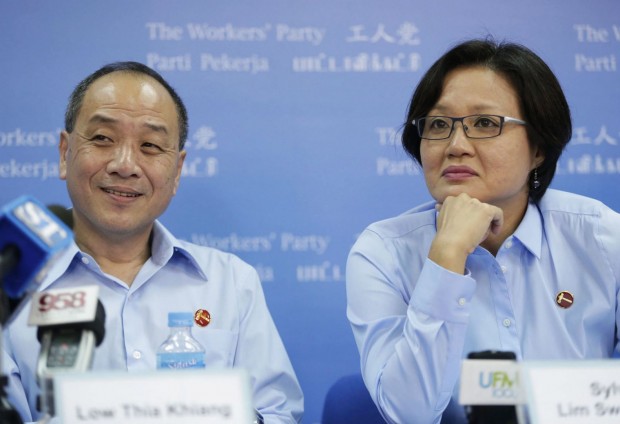 Opposition Members of Parliament Low Thia Khiang and Sylvia Lim took issue with amendments the Government is attempting to make to section 29 of the Government Proceedings Act (GPA).
Speaking in Parliament today (9 May) Ms Lim pointed out that the GPA enables the government to sue and to be sued, and that according to Clause 9 of the amendment Bill, Section 29 of GPA to provide that in such law suits, it is possible that the court can certify that legal costs for more than two government lawyers may be payable.
This she pointed out is a change from the current position, where the maximum number of government lawyers a litigant may have to pay for is two.
According to the note to explain the amendment, the change is to bring the position in line with that in other civil suits or family matters. The current position in other civil suits and family matters is that the court may order a litigant who loses to pay legal costs for more than two solicitors on the winning side. In order for such a court order to be obtained, the court must find that more than two lawyers were reasonably required to handle the case, due to factors such as the complexity of the case or novel points of law being raised.
Ms Lim said that she has concerns about the government taking such a position, as the prospect of a very heavy legal burden in legal costs could have a dampening or even crushing effect on persons involved in suits against the government.
“As it currently stands, anyone who is thinking of suing the government or defending a legal action by the government is aware that if the action is lost, he will likely have to pay legal costs to the government,” Ms Lim said.
“This is on top of funding his own lawyers to meet the fierce challenges thrown by the government’s legal team, whose limitless resources include having the entire legal service and civil service at its disposal,” she added.
The Workers’ Party MP said that not many individuals or entities have the financial resources needed to take the government to court or to defend a suit by the government.
As the purpose of the Government Proceedings Act is to enable the government to sue and be sued, she urged the government to take a broader view on the matter and keep the current provision of capping its claim for legal costs to no more than two legal officers.
“If the costs of suing or being sued by the government are too high, people will surrender,” Ms Lim suggested.
Ms Lim asked the Government to avoid sending the signal to members of the public that it is trying to use the prospect of crushing legal costs to deter or wear down those who may wish to sue the government or to defend government law suits vigorously.
Senior Minister of State for Law Indranee Rajah said that the amendment to GPA is meant to bring the previous laws in line with Order 59, Rule 19 of the Rules of the Court and Rule 871 of the Family Justice Rules 2014; and that it is not the Government’s intention to intimidate anyone.
Ms Lim in rising to record her reservation said: “Ms Indranee mentioned that this does not give the Government additional powers, but the fact is that under the existing Section 29 of the Government Proceedings Act, the cost claimable is limited to two. So this amendment would actually give an allowance to the court to certify more than two lawyers’ cost being payable. So it is a change to the legal position as far as the GPA is concerned.”
Ms Rajah suggested that the intent of the amendment was to “bring it in line” with what is available to other civil parties, and that “it is not intended to be costs used in an oppressive manner, but really where if costs are incurred, it gives the court the discretion to allow costs for more than two counsels if the court really thinks this is an appropriate place to do so.”
“The idea is that if it is a case that really a lot of work was incurred, and it appears to the court that it is fair and just to award costs for more than two counsel in such a situation, the court can do so. But if the Court, having taken into account the circumstances of of the case, feels that it is not equitable to do so, then it will be up to the Court,” Ms Rajah explained.
In pointing out the the Republic’s Courts are objective and fair, the junior Minister said that the safeguard therefore lies in the hands of the court. She further said that the Government’s approach is not to use costs to be oppressive and that it does its best to be fair, objective and rational about legal proceedings.
Mr Low then sought further clarification and said:

As I have indicated, when the Government has to defend a matter or pursue a matter, it will do so after having taken advice, doing so rationally, and doing so if it thinks it is the right course of action. That is the first thing when it comes to taken proceedings with respect to the amount of costs that the person may face, when a person brings proceedings against the Government, that person would, no doubt, be legally advised, and also have an indication of the amount of cost that would be incurred.