International publications suggest that our report on SPH is accurate 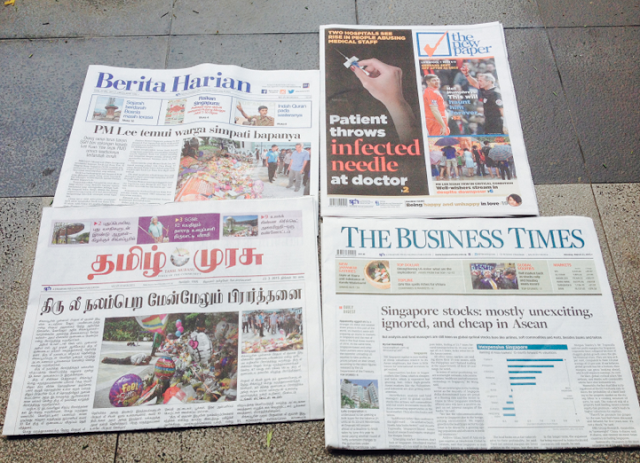 This publication broke the news that SPH may, in a restructuring exercise, retrench staff and merge their freesheet MyPaper with their tabloid The New Paper (TNP). The New Paper is expected to be relaunched as a freesheet after the merger. (https://theindependent.sg.sg/will-sph-announce-major-changes-soon-hundreds-of-staff-to-be-retrenched).

Hundreds of staff are expected to be affected by the restructuring of the media giant. We wrote to Mr Patrick Daniel, the Deputy CEO of SPH (English Publications) to enquire about the pending changes, and he replied that SPH does not respond to speculations.

Now, Bloomberg has picked up on our report and has said (in referring to three people with knowledge of the matter) that SPH does intend to “merge two of its tabloids to form a new free-distribution publication as part of a restructuring effort.”

The international publication also said that “the company also plans to cut 5 percent to 10 percent of its workforce, mostly part-time workers.” According to its financial report for the fiscal third quarter (as at 31 May 2016), SPH had a head count of 4,229 employees. Yahoo Singapore reporting on Bloomberg’s article and quoting multiple sources within SPH who did not want to be identified, said SPH intends to hold a town hall with its employees next Monday (17 October).

A staff from TNP who did not want to be named told Yahoo Singapore that many in the media company are worried about their future and that the mood there is sombre.

“The older folks are especially concerned about being laid off, given that the economy is not doing so well now. I am concerned too as I am already in my 50s and I still have a family to look after,” the employee said.

Another employee with the same paper said, “The mood in the office is very quiet. Yes, I’m concerned. I don’t know where I will go after that if I’m affected.”Follow us on Social Media