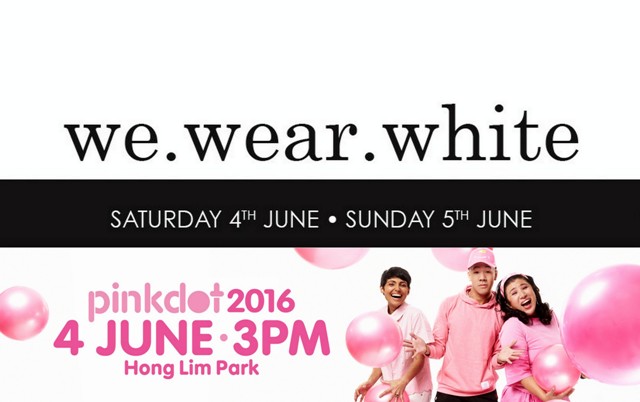 On 19 May, the network of churches under the Love Singapore umbrella and headed by Reverend Lawrence Khong, released a message that they were spearheading he Wear White campaign this year. The Humanist Society said that they find the message of the unity movement of the protestant churches to be troubling, especially its repeated emphasis on the word ‘majority’.
“In Singapore’s multiracial, multireligious society, no particular religion or group can claim to speak for the majority,” the Society said. We republish the Society’s response to Love Singapore in full.
—
LoveSingapore’s Wear White message is troubling in a multi-cultural, diverse Singapore
On May 19, the LoveSingapore Christian network released a Facebook post launching the Wear White movement for 2016, calling on churches in its network to wear white. While the Wear White movement was founded last year by a Muslim religious teacher as a counter-movement to Pink Dot, LoveSingapore, as a Christian group, appears to be taking the lead this year. This year, the Wear White movement is scheduled on the same weekend (June 4-5) as Pink Dot, which will be held on June 4 at the Speakers’ Corner.
LoveSingapore’s Facebook post, which they said was addressed to the government, church, press and society, contains several points which are troubling. In the second point of the post, the LoveSingapore network calls for churches to arise and move on their convictions regarding public morality. This was followed by Howard Hendricks’ quote which said, “A belief is something you will argue about. A conviction is something you will die for.”
The juxtaposition of LoveSingapore’s mobilisation call and Hendricks’ quote raises eyebrows. Such rhetoric is questionable, especially in view of this year’s terrorist attacks in Brussels and Jakarta.
The third and fourth point in the message emphasized the importance of listening to Singapore’s conservative majority and keeping with the core values they possess. It also warned that the conservative majority will push against attempts to promote lifestyles and ideologies that openly and outrightly contradict Singapore’s laws, government’s stated policies, national core values, and the conservative majority’s views on public morality, marriage and family.
LoveSingapore’s repeated emphasis on the word “majority” is troubling. In Singapore’s multiracial, multireligious society, no particular religion or group can claim to speak for the majority.
The Humanist Society (Singapore) calls for respectful, informed discussion on the topic, based on reason, evidence, and compassion around the cause.
Executive Committee
Humanist Society (Singapore)Follow us on Social Media