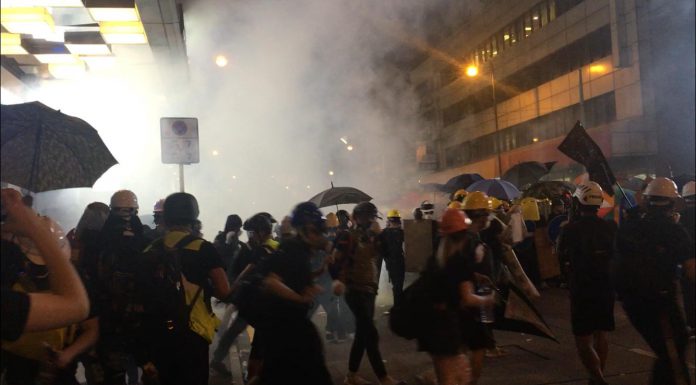 After a standoff, police fired multiple tear gas and rubber bullets at protestors while the protestors in turn fought back with objects like bricks and eggs, and armed themselves with improvised “shields” made by kickboards, cardboards and road signs

The protest started with a police-authorised gathering in a park in the central district, before tens of thousands of protestors defied police orders to march through the center of the city: East towards the shopping area of Causeway Bay and West towards China’s liaison office.

They crowd occupied the main road, set up barricades, chanting “Reclaim Hong Kong”. Demonstrators have been angry about police brutality in the past few protests.

Hundreds of riot police blocked the protestors from reaching the Chinese liaison office. Last weekend, protestors wrote graffiti and threw paint on the wall and at the national emblem, drawing an enraged reaction from the Chinese government.

After a standoff, police fired multiple tear gas and rubber bullets at protestors. The nearby streets, which were a residential area, were filled with smoke. Protestors fought back with objects like bricks and eggs, and armed themselves with improvised “shields” made by kickboards, cardboards and road signs.

Some protestors threw tear gas grenades back to the police. At about 8:30pm, protestors  set a cart on fire and pushed it in the direction of police.

The centre district was filled with tear gas until midnight. At about 10:45pm, hundreds of protestors were surrounded by police from different angles and continued being shot at by rubber bullets and tear gas.

At about 11:15pm, most protestors started to leave through the nearby metro station, while police still fired tear gas in their direction.

The protest follows a march in the town of Yuen Long, which turned chaotic as police fired tear gas, rubber bullets and sponge grenades to disperse the crowd.

Sunday’s protest also marked the seventh weekend that Hong Kong people took the street to protest over an extradition bill amendment. Aside from that they are now urging the government to set up an independent commission of inquiry headed by a judge to look into police brutality. -/TISG