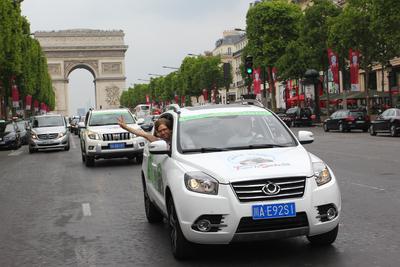 CHENGDU, China, July 7, 2015 /PRNewswire/ — To realize the development of China’s “One Belt and One Road” strategy, the China National Tourism Administration has proposed a series of activities themed ‘Beautiful China, 2015 – Year of Silk Road Tourism’.

The motorcade passed through the Triumphal Arch

Sichuan has focused on development strategies and targets that speed up the construction of the province’s major tourism resources in order to become a tourist destination on the world stage. For this reason, Sichuan has made bold marketing innovations by planning and carrying out a large international marketing event named ‘Traveling along the Southern Silk Road and Exploring the Hometown of the Giant Panda – European Fans Visit the Panda’s Hometown’.

The self-driving groups consist of European panda enthusiasts selected for this event whom, along with specialists, scholars and well-known media, departed England and Spain respectively on June 12, and met up in Paris. Driving their specially liveried ‘made in Chengdu‘ SUVs, they passed the historic Eiffel Tower and Arc de Triomphe, through the mysterious Charlottenburg Palace in Berlin and on along the beautiful Danube, enjoying a magical and romantic cross-country adventure, all the while promoting panda-themed tourism in Sichuan.

As part of the event, the giant panda, Southern Silk Road and Sichuan tourism are integrated perfectly for the first time. The giant panda is China’s national treasure loved by the world’s people and has been an important messenger for exchange between China and Europe for a long time. All the giant pandas in European zoos are from Sichuan, their homeland.

With Sichuan as its starting point, the Southern Silk Road is an ancient channel for trade contacts and cultural exchange between China and other countries in Europe and Asia that opened over 2,000 years ago. As a place of ultra-rich tourism resources rarely seen in the world, Sichuan has many natural and cultural heritage sites including the primitive ecosystem of the giant panda habitats in addition to world-famous tourist resorts like Jiuzhaigou, Huanglong, Mt. Emei, Leshan Giant Buddha, Dujiang Weir and Qingcheng Mountain. This event has therefore connected these world-class tourist elements like a pearl necklace.

This is the first time panda lovers from across Europe have been invited to the panda’s hometown, and marks an opportunity of a lifetime for European tourists to travel in Sichuan. The SUVs, which were made in Chengdu and represented the city on the European leg of the tour, provided a vehicle through which the panda lovers were able to live out a life-long dream while experiencing the beautiful scenery on the long journey.

The European fans of giant panda and the SUVs “made in Chengdu” made their stage poses in Charlottenburg Palace in Berlin, Germany. The motorcade passed through the Hofburg Palace in Vienna. Via:: European Panda Enthusiasts Drive from Paris to Chengdu as Part of ‘Beautiful China 2015’