Chippy the macaque which has sparked discussions on national interest 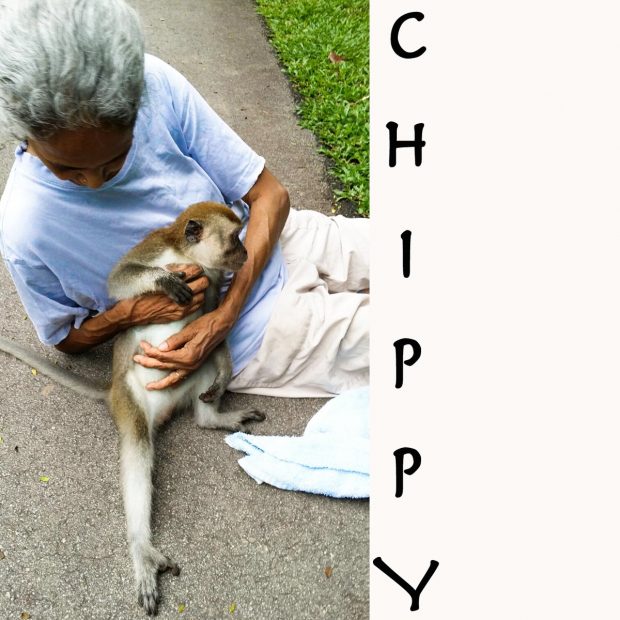 Chippy is a young, male long tailed macaque, which was possibly orphaned when young by routine culling of macaques by the AVA in conjunction with the NParks. A family living in the estate close-by to Hortpark took pity upon and befriended the young monkey and feed him on a daily basis, as did some others in the area. This is a prosecutable offence, which carries a $5,000 fine.  The family contacted ACRES within 3 days of spotting him and asked for their help because he was demonstrating domestic behavior like touching their hands and huddling close by.

The family had seen wild monkeys in the area before between 2004 – 2009 and left them well alone as they were in troops. What compelled them to help this particular monkey was that he was alone and very tame and unlike the wild monkeys they had encountered in the park previously.

Aware that they were contravening the law, compassion led the family to continue feeding the lone monkey. They consulted AVA, NParks, and SPCA in addition to ACRES. The official stance was that Chippy should be left alone to fend for himself and try to integrate back with the original troop of macaques and allow Nature to take its course.

This, from a species conservation management view-point (in a highly urban environment such as Singapore) is scientifically logical.

Singapore had 1,800 macaques in 2013 which means if figures are accurate, (and discounting any further breeding in the past few years) there may be only 160 macaques left in the ‘wild’ in Singapore.  This is staggering percentage of cull by any yardstick!

Based on compassion, the family reached out to find monkey sanctuaries in South East Asia. Only after exhausting all local avenues they found the Ape and Monkey Sanctuary Wales, UK, which was willing to take Chippy to join 4 others of his species. The family is willing to pay for all the export permits, medical checks, crating, capture and housing and freight at their own expense.

Despite this, it appears that the authorities: the AVA and NParks instead of granting permission to send him abroad, would prefer to either move the monkey to try and integrate it with another troop in Singapore, cull him or let Nature take its course. (The introduction of a male macaque to a new troop usually results in its death, at the hands of the dominant males.) And surprisingly ACRES (Singapore’s only wildlife animal welfare NGO) was in favour of not sending Chippy to a sanctuary abroad as it was deemed to be a matter of national interest.

The family will be served a formal warning for feeding monkeys in Singapore or possibly prosecuted.

This is reminiscent of the case of Marius an 18 month old giraffe in Copenhagen Zoo in 2014 which although healthy was deemed to have no genetic value to the European zoo giraffe population. It was deemed to be taking up valuable zoo enclosure space. It was decided by the zoo director that Marius would be put down, dissected as an educational tool to school students and then fed to the zoos lions. This was despite the fact that some zoological institutions offered to take Marius.

This decision was scientifically (genetically) correct but a public relations disaster for the world zoo community.

To place the situation into its proper perspective, annually the world kills and eats 56 billion land animals and a similar number of aquatic animals. There are 100 million animals in scientific laboratories worldwide.

So what’s another monkey?

Yet like that recent video clip which circulated on social media of the young pig that jumped off the truck bound for the slaughterhouse and made its escape – most viewers showed compassion and supported this underdog.

Singapore as a society has grown up and is now a first world country where ethics should play a part in our decision-making. Surely there is a collective conscience, which tells us sometimes not always to go by the book. Here is a very sad example of Science versus Sentiment. I hope the authorities will exercise a sense of compassion in this case.

—
Bernard Harrison is a Honorary Trustee of Wild Welfare an organisation committed to improving the welfare of captive wild animals around the world.
Follow us on Social Media