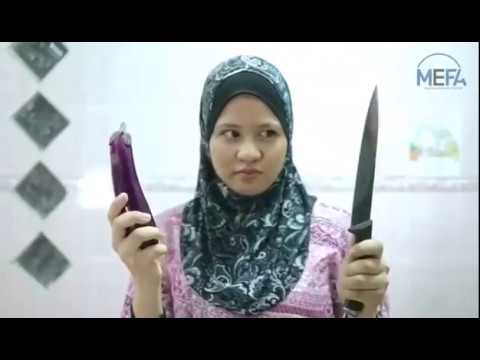 The video starts with a father and a son leaving a mosque after prayer. It is set somewhere in Malaysia.

The video is dated December 2017 and was diffused as a promotional item for a wedding festival event.

Well. Polygamists should watch the reaction of the ‘mother’ of the son in the video.

The still here shows a Malay woman wearing ‘tudung’ and holding an eggplant and a big knife. Consequently, the knife is to cut the ‘bringal’ into pieces.

If the idea behind the video was to warn Malay men not to get too excited in their plans to marry a second wife, then it should work. Really.

Watch how the woman cuts the bringal into pieces while she tells the son this is the answer to the father’s suggestion that he needed a second wife.

In the video, the father tells the son a speaker at the mosque said children should love their mother three folds and then love their father.

However, the good father tried to divert the essence of the love into a polygamy game.

The dad tells the son to inform the mom that the speaker at the mosque said a son should be good to the parents as follows, by having three moms and one dad.

The son tells them mom the problem is there is only one mom, lacking the other two ‘moms’.

The mother’s reaction is the most hilarious. She cuts the brinjal in three, telling the son to inform the dad about her actions.

She is basically telling the son she will cut the ‘brinjal’ into three if the dad wished to ‘share’ with other women!

The dad understood that he will be the next John Bobbit!