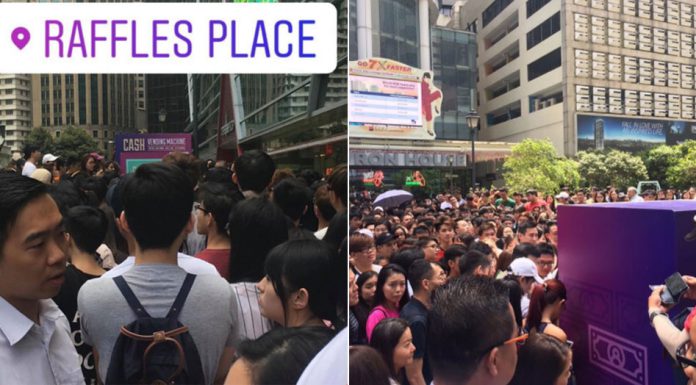 Singapore police have put a stop to a cash vending machine that pays out $50 notes when customers slot in $3. The machine is part of a publicity marketing stunt where a man sitting inside the vending box dispenses $50 to eager customers, as part of the campaign called ‘Three Dollar Baller’.

It is unclear what exactly Three Dollar Baller is and the organisation has said that more details will be out tomorrow, March 1. This did not stop eager individuals from swarming the box when it appeared downtown yesterday evening and this morning.

The vending machine first appeared on Orchard Road yesterday between 5pm and 8pm. Chong Wei Lim, a reader of The Independent, alerted us about the machine that was located outside the H&M outlet near 313@Somerset. Lim said, “A LOT of people were lining up and I see people actually getting the cash.”

Even larger crowds of about 300 people swelled around the machine this afternoon when it appeared just outside Chevron House at Raffles Place, around 11.30am. At 11.45am, the box was moved to the sidewalk by Battery Road and the crowd followed. 15 minutes later, at 12pm, the box was again moved to the grass patch in front of Chevron house as a larger crowd swarmed the machine.

Help la… the queue for the free $50 pic.twitter.com/QVRPSKVORy

the 3 dollar baller over at raffles place could have been done better. Instead of earning 50 bucks, me and my boyf are earning blueblacks because of the pushes and people toppling over us

Hahahahahahhaahahahhaais
My broke ass just tryna get lucky to get 50. But yall over here like zombies.

Two uniformed officers arrived at the scene and were spotted talking to the organiser for around 10 minutes, following which the organiser claimed that she was told to stop the outdoor campaign. The organiser asked the crowd to disperse at 12.45pm and said, “I’m very sorry but because the police is already here, we have to stop the activation.”

The vending machine was set to appear at 313@Somerset again this evening at 5pm but the event was abruptly cancelled. The organisers explained that all the $50 notes had been redeemed.