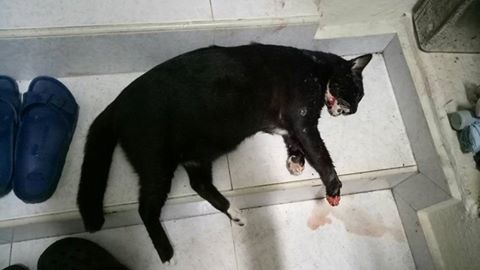 Facebook user Hakim shared that he was shocked to find his cat outside the porch in its own pool of blood. He found the dead cat at about 5am on Thursday (8 Dec) at Block 217 Marsiling.

The cat was foaming at the mouth and Hakim suspects that it may have been poisoned. He has filed a report with the Agri-Food and Veterinary Authority of Singapore (AVA). His post has gone viral with over 1,200 shares. Most expressed outrage and condolences. At least one commenter took Hakim to task for letting his cat roam free outside his flat.

According to the post, the cat was placed, or made its way back to the house somewhere between 3 to 5 am.

The owner claims the incident happened at Block 217 Marsiling.

He has filed a report with the Agri-Food and Veterinary Authority of Singapore (AVA), and claims that the cat might have been poisoned due to the foam coming out of its mouth when he found it.

Most of the Facebook comments has been those of shock, outrage and condolences for the cat’s death.

But some people chose to shine the light on not just the killer, but the family as well.Follow us on Social Media