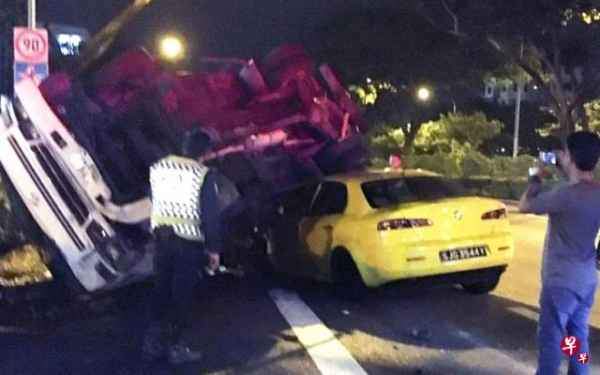 Shin Min Daily News reported that an Alfa Romeo sports car smashed into the rear of a pickup truck in Tuas yesterday (26 Dec) at about 4.25AM. The lorry flipped over to its side from the impact of the accident.

The sports car’s windscreen was shattered to smithereens while the driver’s safety air bags were deployed. According to the report, the driver was nowhere to be seen after the accident. It is believed that the driver fled the scene of the accident.

An witnesses recounted that he stopped to inspect the damage and heard the voices of men coming from inside the lorry. He reacted quickly and pulled out 3 foreign workers out of pickup.

The witness further said that the men refused to be admitted to hospital and claimed that their injuries were not severe. 2 of the 3 men rejected a ride to a nearby hospital by the attending ambulance and paramedics.