The Independent Singapore News
International Why are Indian farmers protesting, and what can Modi do?

Why are Indian farmers protesting, and what can Modi do? 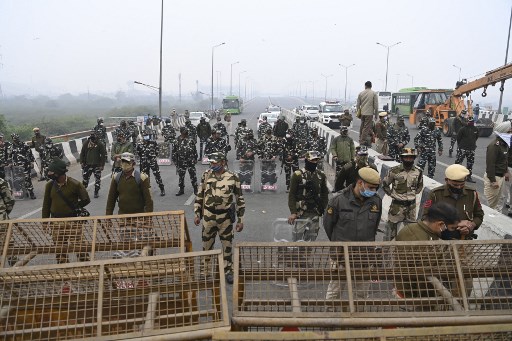 As an army of resolute Indian farmers keeps up its blockade of New Delhi, Prime Minister Narendra Modi faces potentially the trickiest challenge yet to his authority and reform agenda.

With the protests entering their third week, AFP looks at the background to new farm laws, why they are sparking such opposition and Modi’s limited options.

What is the state of Indian agriculture? –
India’s farming sector is vast and troubled.

The “Green Revolution” of the 1970s turned India from a country facing regular food shortages into one with a surplus — and a major exporter.

But for the past few decades, farm incomes have remained largely stagnant and the sector is in sore need of investment and modernisation.

More than 85 percent of farmers have less than two hectares (five acres) of land. Fewer than one in a hundred farmers own over 10 hectares, according to a 2015-16 agriculture ministry survey.

India hands out an estimated $32 billion in subsidies to farmers annually, according to the finance ministry.

How are farmers coping?
Water shortages, floods and increasingly erratic weather caused by climate change, as well as debt, have taken a heavy toll on farmers.

According to a Punjab government report in 2017, the northern state will use up all its groundwater resources by 2039.

Farmers and their workers are also abandoning agriculture in droves — 2,000 of them every day according to the last census in 2011.

What did Modi promise?
Indian governments have long made big promises to farmers — a crucial vote bank — and Modi is no exception, vowing to double their incomes by 2022.

In September, parliament passed three laws that enabled farmers to sell to any buyer they chose, rather than to commission agents at state-controlled markets.

These markets were set up in the 1950s to stop the exploitation of farmers and pay a minimum support price (MSP) for certain produce.

The system has led to farmers sometimes growing crops unsuited to the local climate, such as thirsty rice in Punjab, and can be fertile ground for corruption.

But many farmers see the MSP as a vital safety net, and fear being unable to compete with large farms and being paid low prices by big corporations.

“The laws will harm the farmers and in turn destroy our livelihood,” said Sukhwinder Singh, a farm worker who cycled 400 kilometres (250 miles) to the protests.

“Land, cattle and farmers will be enslaved by rich people. This government wants to finish us,” he said.

What can Modi do?
Modi has drawn fire before — a disastrous withdrawal of large banknotes in 2016, for example — but his popularity has held up, winning a landslide re-election in 2019.

From late 2019, there were months of protests against a citizenship law imposed by Modi’s Hindu-nationalist BJP government that was seen as discriminatory to Muslims.

But the BJP, with its clout in traditional and social media, was able to depict the demonstrators as “anti-nationals” before Covid-19 eventually snuffed out the protests.

Modi, 70, has tried to brush off the current agitation as being stoked by an opportunistic opposition “misleading” the farmers.

Some in his party have upped the ante by branding the protesters — many of whom are Sikhs — as “hooligans, Sikh separatists and anti-nationals”.

But with the farmers, it is different.

They enjoy widespread support among Indians and ignoring them clashes with Modi’s self-styled image as a champion of the poor.

In rural areas, where 70 percent of Indians live, there is already a growing perception that Modi is cosy with big business and billionaire industrialists such as Mukesh Ambani, Asia’s richest person.

“There are many things which are outdated in the agriculture sector. But reforms cannot be pushed like this,” Arati Jerath, a political analyst, told AFP.

“This is so far the biggest challenge to the government… It will have to find a way to walk back and save face at the same time.”