Entertainment Celebrity Tyler Ten vs Desmond Tan: Is there a Shirtless Competition going on?

Tyler Ten vs Desmond Tan: Is there a Shirtless Competition going on?

Tyler Ten, a 26-year-old Singaporean actor, surprised netizens by heating up the atmosphere with a shirtless gym picture.

In an Instagram post, the actor shared a mirror selfie of himself at the gym, obviously after his workout routines. He said in his caption that working out is his “best therapy”.

The photo captured the attention of many fans including his Singaporean celebrity friends who all expressed their thoughts on the unexpected scene.

Nick Teo (@nickkteo), also a Singaporean actor, host and model, commented: “Hello police, this is illegal! 🔥🔥🔥”, wherein Tyler replied with a message that the police should catch Nick Teo for being a hot guy as well.

In the same context, Benjamin Tan (@bentanzx), another Singaporean actor, commented “Security hello” as if he was calling the authorities. Tyler Ten jokingly replied with “don’t get me banned 🤣”.

To spice it up, YES 933 DJ Zhong Kunhua (@kunhua_c) tagged Desmond Tan (@thedesmondtan) and said: “I think there’s a competition going on! 😂”.

Desmond Tan, a 36-year-old Singaporean actor,  recently also posted a shirtless beach picture exposing his trimmed body on his Instagram page – which garnered a lot of comments from netizens too.

Desmond commented on the photo asking if he had found his T-shirt yet, but Tyler replied that they took each other’s shirts. 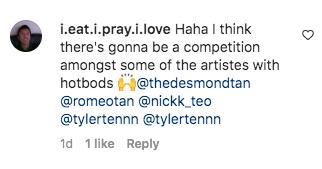 Aside from going to the gym and working out, Tyler Ten is a Muay Thai practitioner and trainer. He started learning this martial art form when he was 14 years old and had his very first Muay Thai competition in the ring at the age of 15 years old.

No wonder this Singaporean hottie exhibits such a well-fit and toned body.