The ghost of LKY and expelling the fear within 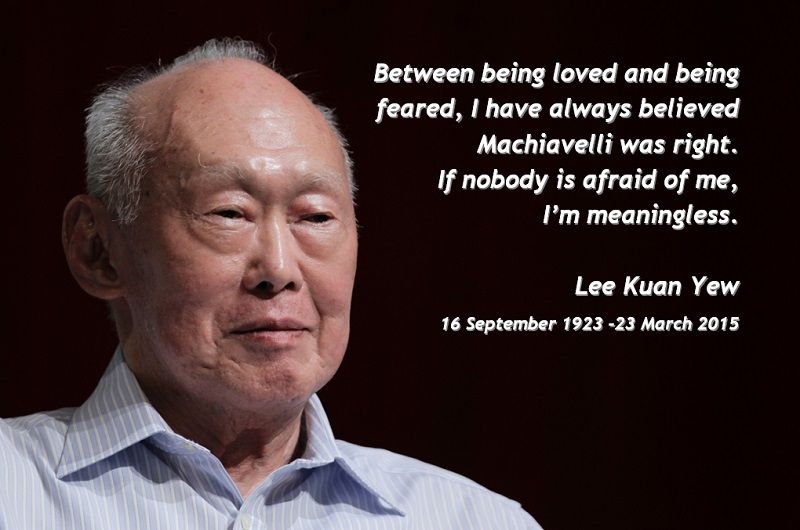 By Howard Lee
One year has passed since the death of former Prime Minister Lee Kuan Yew, and as the nation no doubt gears up to commemorate his passing, it is just as important to reflect on what part of his legacy we need to shed.
As a technocrat and politician, Lee should be recognised for what he did. Singapore today is a mirror of many of his policies. While we might not agree with a good many of these policies, it is without doubt that they have formed Singapore into what we are today, infused into the pragmatic approach that we apply to everything in life.
Yet it is just as crucial to look beyond the works of the man and delve deeper into the national psyche he has left behind, and this is one area where very little can be said to credit the man, with just as little to be said to credit our society.

Supporters of Lee would invariably refer to his quote on chasing rainbows, but we cannot deny that the man has been actively instrumenting a nation built on fear – of himself, of racial discord, of economic vulnerability, of western influence, of poor leadership, take your pick – that to this day has continued as the (some say winning) narrative of his People’s Action Party and of Singaporeans as a whole. This has been a great and enduring part of Lee’s legacy, and hence more difficult to undo.
At the launch of Change in Voting, a book that documents the 2015 General Elections, sociologist Terence Chong said that the death of Lee had a profound impact on the psyche of Singaporeans, which likely contributed to a swing in votes for the incumbent PAP.
“It was not just a sympathy vote (for Lee Kuan Yew),” said Chong. “There was this media loop of old speeches, visuals of the country in the past. This struck a chord with the people, that the father is gone and the child must grow up. There is this sense of immense vulnerability.”
This same sense of vulnerability has been carried forward by many Singaporeans. High-profile individuals like Bilahari Kausikan warn of an impending tumultuous world order that would force Singapore to be more nimble, particularly in foreign policy choices. Others are wont to follow by cautioning about what an ideal political leader should be, taking not just a leaf but the whole tree from Lee himself, again tapping on national unity, vulnerability and the risk of anarchy.

The most prominent example was, of course, the video produced by the group We Are Majulah, which opened with a spectre of terrorism and social unrest, once again channelling Lee. It banked heavily on a narrative that we have grown accustomed to: Of fear and vulnerability, that Singapore is always in crisis, and it is this threat of crisis that can or must rally us together.
The fear narrative has been an essentially part of the Singapore public mentality, perpetuated with gusto by the government. Home Affairs Minister K Shanmugam recently announced his intent to bolster counter-terrorism security measures, and given that it was made so close to Budget 2016, we can expect this to form a great part of future government policy and public spending.
Such a national narrative says that we are a small nation, constantly at threat from aggressors, hence the need to stay together, sacrifice individual needs for the sake of the nation’s security, stay prudent and vigilant, and let the government take care of the rest. This narrative has been used to justify almost everything the government does, from defence spending to scrimping on social security, from arrest and detention without trial to shutting down controversial websites.
But this narrative of fear should not, and cannot, be the one we accept unequivocally and continue to ride on into the future. In Hard Choices – Challenging the Singapore Consensus, authors Donald Low and Sudhir Thomas Vadaketh called out the vulnerability narrative as one that is probably constructed by those in power to maintain the status quo. Low and Vadaketh view this as a trade-off between the government and the citizenship, leading to an acceptance that individual liberties are subservient to the state and political stability.

The rationality that we have been called to uphold, the cautionary and think-for-your-future mindset, is really anything but rational. We make political, policy and cultural choices with white-knuckled anxiety and double seatbelts, forgetting that fear cripples us, limits our choices and imagination, and makes us even more vulnerable than if we were given the freedom to consider options out of the box.
So if we wish to commemorate Lee Kuan Yew, our best option is to really wrest that rainbow from the hands of those who are playing with the light settings, and deliberately chart a new course away from Lee’s legacy of fear.