Earlier this year, Mr Tan had shared a photo of a rotting drain crossing at the back of his house, he then used the plywood backing from his old election posters to fix the wooden bridge 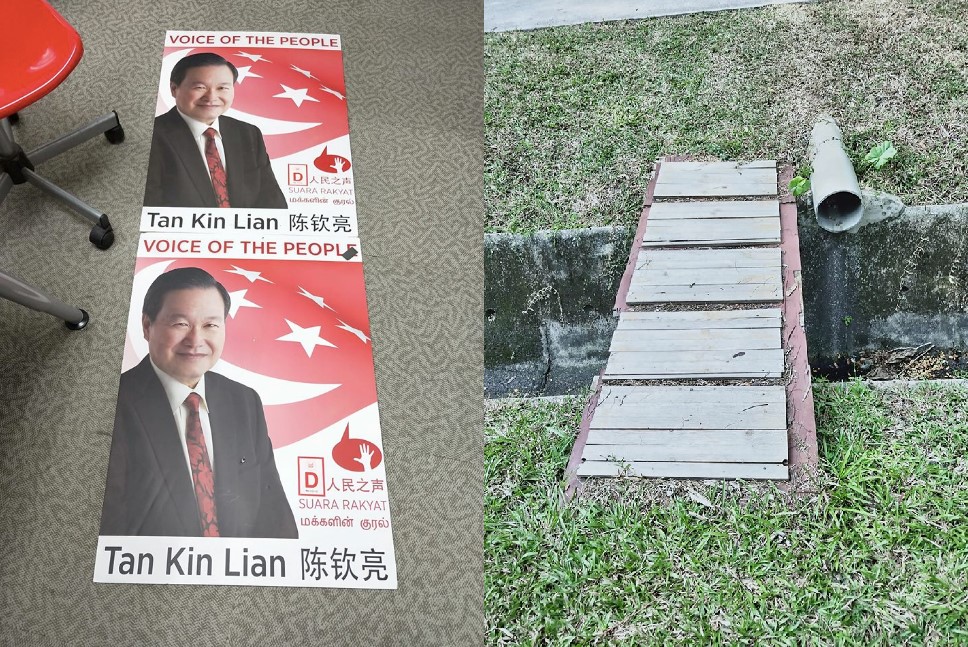 Ex-Presidential election candidate Tan Kin Lian has revealed that the drain bridge he reinforced using his old election posters is still standing months later, despite the criticism he received that the bridge will collapse.

Earlier, in January this year, Mr Tan shared a photo of a rotting drain crossing at the back of his house and solicited advice on how he can secure the bridge.

He later decided to use the plywood backing from his old election posters to fix the wooden bridge and joked that the posters came in handy even though he lost the 2011 election so badly that he even lost his deposit.

“It cost me $2 for the plywood, nails and paint. If the govt does it, it may cost $20,000 and take two years. Will I be charged for criminal defamation?”

Mr Tan’s contraption drew praise for his innovative use of his old election posters as well as criticism that the crossing would not last. One netizen, Boon Tan, asserted:

“This can only be temporary. The plywood is not weather proof and will peel off in no time making it dangerous to walk across. It is slippery on rainy days. There is no railing to prevent children falling into the drain. If (sic) accident happens you can be sued.”

Mr Tan responded and claimed: “I wish to inform report (sic) to Boon Tan that I have been extra careful in walking on this crossing. So far it has been (sic) secure than previously.”

On Monday (19 Aug), Mr Tan updated on Facebook that the “crossing is still in good shape” months later. He even dedicated the longevity of the crossing to “to the kiasi Singaporeans who predicted that it would collapse and make me fall into the drain.”

Some netizens, however, urged Mr Tan to continue monitoring the crossing since it appears that the contraption appears to have water damage and cracks. Mr Tan promised to look out for such issues: