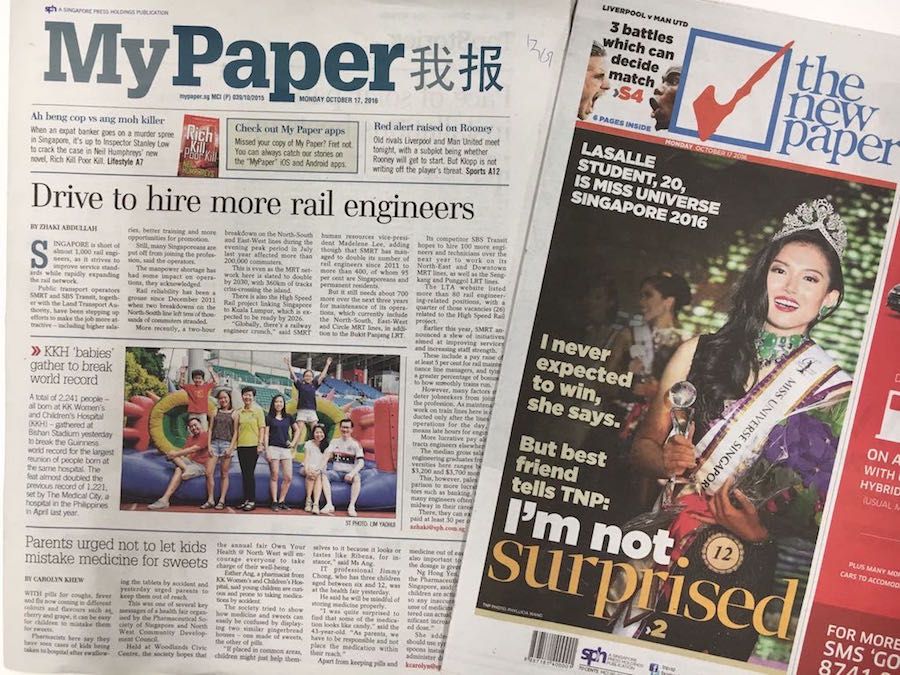 Singapore Press Holdings in a press release issued yesterday (17 Oct) announced the “merging of My Paper and The New Paper (TNP) to form a revamped TNP which will be distributed free.” The media giant said: “the new TNP, which will combine the strengths of both products, will be available from December at existing distribution points including MRT stations. It will continue to be available online.”

The major changes in the company which publishes the monopolistic broadsheet, The Straits Times, also involves “a staff reduction of up to 10% over two years through attrition, retirement, nonrenewal of contracts, outplacement and retrenchment.”  SPH has a workforce of 4,182 as at 21 Aug 2016.

This publication was the first to report on the major changes underway in SPH (https://theindependent.sg.sg/will-sph-announce-major-changes-soon-hundreds-of-staff-to-be-retrenched). When we wrote to Mr Patrick Daniel, the Deputy CEO of SPH (English Publications), to enquire about it, he replied that SPH does not respond to speculations.

Two major international publications – Bloomberg and Yahoo Singapore – picked up on our lead and confirmed that SPH intended to merge two of its newspapers to form a new free-distribution publication as part of a restructuring effort.

When Creative Media and Publishing Union (CMPU) – the union representing SPH employees – picked up the online buzz and engaged the management of SPH about possible retrenchments, the management assured the Union that the various reports were speculative. SPH further gave the Union an assurance that they will work closely with it if there are indeed such plans.

CPMU yesterday expressed that it was “deeply concerned” that it was only informed by management of planned job cuts just 30 minutes before SPH was scheduled to announce the move to its staff. The Union said that it would be working closely with SPH management to work out fair retrenchment packages for its members.

According to Aloysius Low, Senior Editor for CNET, who live Tweeted SPH’s Town Hall Meeting, Mr Fernandez said that the merger of the two papers will allow SPH to dominate the free online space.