Singapore—Jamie Chua, who is popularly known as the country’s unofficial Instagram Queen, has been on the receiving end of criticism from netizens for a post about a nightmare that involved migrant workers.

Ms Chua, who goes by @ec24m on Instagram, recently posted a photo on Instagram Stories with cup of coffee and her lush apartment in the background.

The caption read, “I’m sooooo tired today. Woke up at 3.47 am from a disturbing nightmare, dreamt of the Indian workers dorm and they were all rushing into my house. Been so affected by the recent cases, I’ve been suffering from mild anxiety.”

She added, “I think I may need another coffee to stay awake today,” hence the cup of coffee featured in the post.

Wake Up, Singapore featured her post on its Facebook page, saying Ms Chua had been called out for the racist content in it, adding this quote,

“Dear Jamie, you have a large audience and yet you’re speaking about Indian foreign workers as nightmarish creatures barging into homes.

I don’t know what you mean by ‘been so affected by the recent cases’ but the opulent background shows how disconnected you really are.”

But apparently, Ms Chua apologised for her post, and has even pledged to make donations to two migrant workers’ charities, according to a screenshot of another Instagram story from Ms Chua, which followed the one about the nightmare.

She wrote that upon reading the comments on her story, she realized that it was “insensitive and ignorant” and she had merely meant to show how the “pandemic has taken a toll on” her “mental well-being.”

Ms Chua added that she had chosen two charities to donate to, as “this period must be incredibly difficult for them.” She added that this has been “a big learning lesson” for her and that she hoped it would “serve as a reminder to be more sensitive and thoughtful with our words.”

Her next stories featured screenshots of the organizations she had donated to, which were Ray of Hope and Preetipls’ campaign for migrant workers on the give.asia platform. 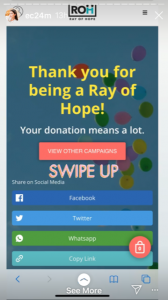 She also replaced the original post with the coffee cup with one that simply read “Self-isolation” and “I think I may need another coffee to stay awake today.” Some netizens defended her, saying that her mental health was suffering, and that the problem was simply her lack of English skills.

But others were less charitable, saying Ms Chua’s “real nightmare” would begin when there are no longer any workers for essential services.

Ms Chua, who was once a stewardess for Singapore Airlines, married Nurdian Cuaca, an Indonesian multimillionaire, although the two later got divorced. She is famous for having asked for a monthly stipend of S$450,000 after they were divorced in 2011. Her 700 square foot closet full of designer wear and accessories has been featured in TV programmes.

The country’s Instagram Queen has more than one million followers. —/TISG