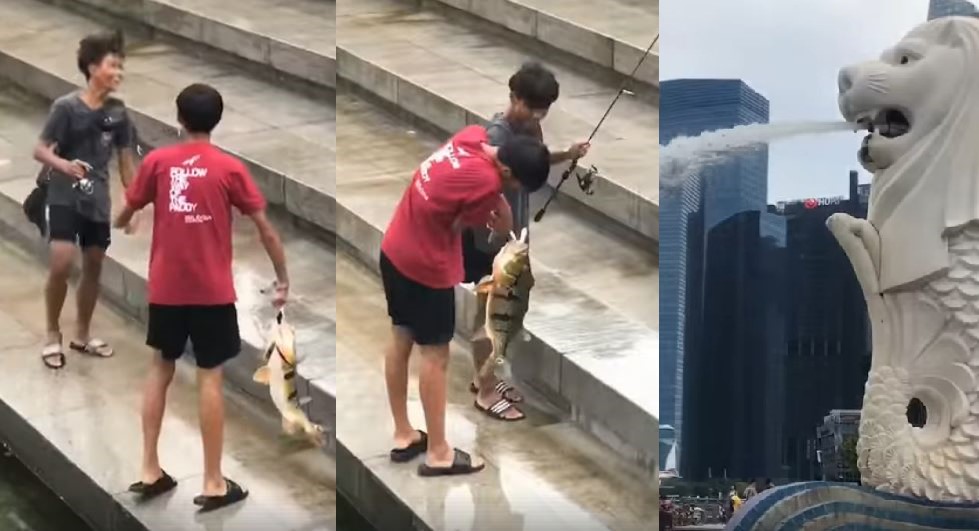 The Public Utilities Board (PUB) has revealed that it has identified the two boys who reeled in a massive peacock bass from the waters in Merlion Park. The statutory board, that is under the Ministry of the Environment and Water Resources, had been on the hunt for the boys since it is illegal to fish at Merlion Park.

The boys caught PUB’s attention after a video capturing the incident went viral online. In the video, a young boy in a red t-shirt can be seen reaching into the water from the steps beside the Merlion and pulling out a large yellow fish. Another boy in a grey t-shirt can be seen holding a fishing rod and laughing, beside the boy in red.

When PUB appealed for more information on the boys last week, netizens criticised the authority and cited Singapore head of government Lee Hsien Loong and head of state Halimah Yacob who said that it is better to eat fish for health reasons and to cut costs.

Yesterday, PUB acknowledged feedback from netizens and revealed that it will counsel the boys:

“We would like to thank concerned members of public for expressing your views on this matter. Please be assured that we will work with the school to counsel and educate the students on the fishing regulations and the designated fishing locations.”

https://theindependent.sg.sg/pub-on-the-hunt-for-two-boys-who-caught-massive-peacock-bass-at-merlion-park/Follow us on Social Media