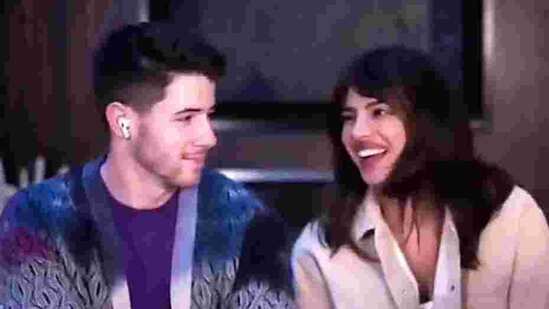 India — Priyanka Chopra’s husband, Nick Jonas, got ‘straight to the good stuff’, that is, her early dating life, while reading her recently released memoir, Unfinished. In the book, Priyanka wrote about life as a teenager in the United States, among other things.

Sharing a video of Nick talking about the book, on Twitter on Thursday, Priyanka wrote, “Leave it to @nickjonas to get straight to the good stuff.” In the video, Nick said, “Some of the stuff about, to be totally real, your early dating life, and your high school crushes… We’ve spoken about it, but it’s just funny to read it.”

Nick said that imagining his wife as a high schooler was ‘fun’ for him to read. The whole time, a visibly red-faced Priyanka held her hands to her face. In the book, the actor wrote about once having to hide her boyfriend at the time in a closet.

She wrote that she was living with her aunt Kiran at the time. At school, she met a Bob (name changed), and began an innocent relationship with him. Once when they were at her house, her aunt returned earlier than expected, and Priyanka had to stuff Bob into a closet. But her aunt found out, and angrily called up Priyanka’s mother, who was back in India.

“One day Bob and I were sitting on the couch watching television, innocently holding hands, when suddenly, outside the window on the sidewalk below, I saw my aunt making her way up the stairs. I panicked. It was 2 in the afternoon and not her usual time to return. There was no way Bob could go outside the house and he and I ran to my room and I shoved him into my closet,” she wrote in the book. “Masi called my mother and said, ‘I can’t believe that she lied to my face. There was a boy in her closet!’,” she added.

In the book, Priyanka also wrote about the difficulties she had to deal with in her professional and personal life, and described her journey with Nick, whom she married in 2018.