Najib in complete denial, says 1MDB charges are ‘made up’ 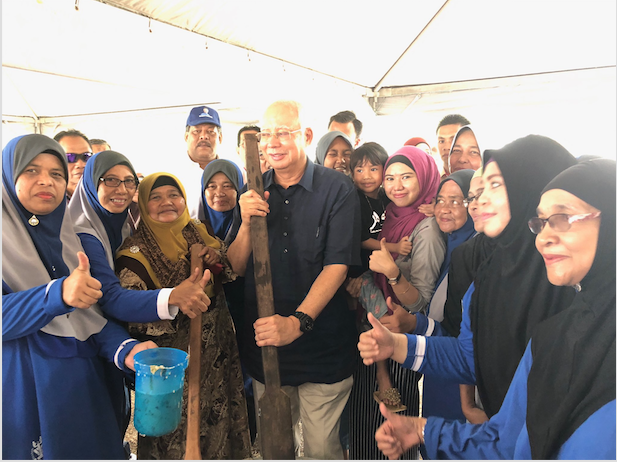 Ex-PM Najib Razak is on the defensive, dismissing 1MDB charges as ‘made up’ against him while he said the cash stash in his house was meant for Barisan Nasional (BN)’s election campaign.

The Light FM Radio channel today said Najib dismissed the corruption charges against him as ‘made up’.

He spoke to BN supporters in his constituency in Pekan and published a picture of him making the ‘bubor lambok’ in the company of the woman wing of the Pekan Barisan Nasional.

Unconfirmed reports said the police took 7 hours to count the value of the cash and jewellery seized at various houses belonging or linked to Najib Razak.

The police raided three units at the Pavillion Tower, where they took hold of jewellery items, cash and other belongings which Najib claimed to be those ‘given to him by friends’.

A video posted by The Star showed Najib at Pekan being asked by a reporter whether he was seeking protection over the probe into 1MDB.

When queried by reporters at Kediaman Seri Kenangan in Pekan, Pahang on Sunday (May 20), the former prime minister said: “No, no. I’m not.”

According to an online portal close to Najib, he has requested the police that he be placed under witness protection, claiming that his life is at risk.

He said his life is at risk not only in Malaysia but also abroad from ‘those involved in the 1MDB affair’.

However, a police source refuted Mr Najib’s denial that he was seeking witness protection, insisting that the former prime minister used the exact term “witness protection” in his police report.

Najib posted a series of pictures showing he is as cool as never before in the face of a rapidly closing window on the 1MDB scandal that is being re-investigated by the new regime in place at Putrajaya.

Najib throws 1MDB board under the bus

Najib is said to have lodged a police report on Friday (May 18) at the Sentul police headquarters in Kuala Lumpur.

On the other hand, Najib apparently said the decisions involving 1MDB deals were made by the board of directors and the management.

He also reiterated that the much-debated fund of RM2.6 billion was a donation from a Saudi royal family.

A series of police raids have been conducted on the Prime Minister’s Office in Perdana Putra, properties associated with Najib including his mansion at Taman Duta and two high-end condominium units at Block A and B of the Pavillion Residences here.

Najib, who is being investigated under Section 4(1) of Anti-Money Laundering and Anti-Terrorism Financing Act (AMLATFA) 2001, and his wife Datin Seri Rosmah Mansor have been barred by the Immigration Department from leaving Malaysia, but are allowed to travel within the country.Follow us on Social Media