Singapore—Home Affairs and Law Minister K Shanmugam said in Parliament on Monday (March 1) that many more cameras will be installed in Singapore in addition to the 90,000 already located in public places such as car parks, neighbourhood centres and Housing Board estates.

He underlined how helpful police cameras have been in helping to solve criminal cases.

As of December 2020, said the minister, over 4,900 cases had been solved with the help of police cameras.

He announced that more cameras are coming, as surveys have shown that people feel safer when police cameras are prominently placed in their neighbourhoods.

“I promise that many more cameras will be installed across the island, subject to the budgetary situation,” said Mr Shanmugam during a debate on this year’s budget for the Ministry of Home Affairs.

At the same time, he warned, “What I would caution, as I have done before in other speeches, is to restate how the algorithms behind some of these cameras actually are managed and guarded.

“Because if that information leaks, if it goes out, I think it can damage public confidence in some of this technology that the Home Team seeks to introduce.”

In his reply, Mr Shanmugam said that the “information obtained from the cameras should be used properly”.

“For example, ICA (Immigration and Checkpoints Authority) has a lot of information… IC registration, travel.

“And we need to make sure that that information is used properly, and not given to unauthorised persons.”

Mr Shanmugam also raised the issue of privacy, saying that police investigating a crime may “come to your house and ask what you said” with regard to an investigation.

“And you are duty-bound to say it, and you can’t say (it is) my right of privacy,” he said.

In the same way, if someone “did something” in public, the police may conduct an investigation and ask the person what they have done, and bring pertinent evidence to court.

“The camera, to some extent, either short-circuits or supplements that approach… and that is why the vast majority of the public actually welcomes these cameras,” he added.

But some netizens said that since the police don’t make footage available to the public, they “might as well don’t install.”

Others, however, said that the cameras are indeed helpful. 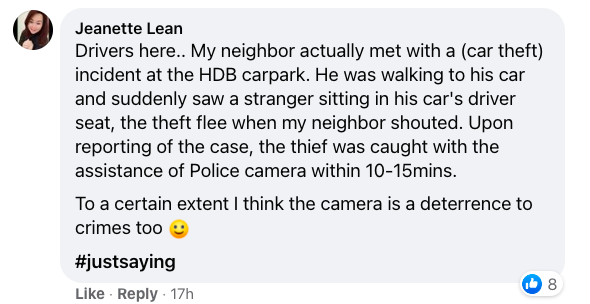 Some netizens agreed that the cameras act as a deterrent to crime.

Still, others warned against too much surveillance at the expense of freedom.