Earlier this week, the Ministry of Education (MOE) defended the practice of withholding original exam result slips from students with fee arrears as “a long-standing practice”, in response to socio-political activist Gilbert Goh’s viral Facebook post describing the plight of a needy student who was not able to collect her PSLE result slip due to unpaid school fees.

While MOE seems to suggest that Mr Goh may not have honorable intentions in exposing this issue on social media, the activist has actually been raising money to help needy student pay off their fee arrears and get their PSLE results slips.

Revealing that a good samaritan has paid the outstanding fee arrears of the first student he had highlighted on social media, Mr Goh asked needy parents who are unable to get a hold of their children’s PSLE results slips to come forward and promised to help by paying the outstanding fees directly to MOE. He said: “Don’t be shy, we are here for you…don’t suffer alone.”

Since his first post on the matter, another kind donor came forward to pay $73.50 to settle another needy student’s fee arrears. This student – who earned a PSLE score of 207 and is set to enter the express stream in secondary school – is from a family who is on state welfare, according to Mr Goh.

The student’s mother gave birth to another child just two days before the release of PSLE results and the student’s father has apparently been in the hospital for the past few months due to an illness.

Generous donors also came forward to help a pair of twins whose plight was shared by Mr Goh online. Mr Goh – who runs a support site for unemployed and underemployed Singaporeans – said that the twins were told that their GCE N level results will be withheld if they are unable to pay their backlogged school fees of $310 each.

Two donors chipped in and paid off the twins’ outstanding school fees after Mr Goh helped share their story. The boys wrote a heartwarming thank you letter to Mr Goh and the donors and said: “You truly make the difference for us and we are extremely grateful!” 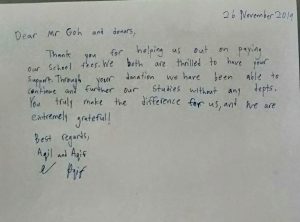 Another kindhearted donor came forward to pay another student’s fee arrears of about $38. The student’s mother – a single parent with six children who are all schooling – had recounted:

“My daughter’s teacher gave her a black face when it’s her turn to collect her results and she say this to my girl: “Your mom did not pay (school fees) so I can only show you your result.” She ran down from her classroom crying because her classmates look at her.

“I pull my daughter to the office and ask about her results but they say because I did not pay…its only $37+ and they say it’s MOE rules. But I argue with the office staff if she did not get her result, I cannot register for her secondary posting…I was given a photocopy instead.”

Another mother, Hazellina, told Mr Goh that her primary school-going boys were in a similar situation but the school did not impose the practice of withholding the results slip after son’s PSLE even though she was not able to pay the school fees. Hazellina told Mr Goh:

“I read and follow how you guys help out the needy…the issue with unpaid school fees and I am actually one of those that didnt manage to pay for both my kids (primary four and primary six). Fortunately, I am lucky cos the school didn’t say anything during the collection of my son PSLE result. I am not too sure if I am in the lower income category or not cos my application for school FAS was not approved.

“I stay in a 4-rm flat which I just bought about a year ago as my rental flat rent was $338 and we have no choice cos HDB says we have to buy as our CPF is enough to buy. Even after a year, our house is still without any bed or wardrobe and we sleep using mattress as our pay mostly goes to paying bills, living expenses and transportation and loans for our kitchen cabinet.

“We live day to day – thank u Mr Gilbert for helping the needy people who doesnt get any help from the goverment…have a blessed day.”

Mr Goh thanked the principal of Boon Lay Garden Primary School “for not sticking with MOE rules and allowed the needy student to receive the true copy of his PSLE result despite owed school fees and not just the photostated copy”.

Thanking the generous donors who “came forward in great numbers to help out those who are needy”, Mr Goh said in one of his posts:

“We hope that MOE will look at students who can’t pay their school fees with empathy regardless of the reasons and withholding someone’s school exam certificate is not the way to go in building a caring and compassionate society. On the contrary, it builds up hatred and vengeance within our youth and stigmatized them for life because they are poor and could not gain access to welfare schemes due to their unusual circumstances.

“Living in the world’s costliest city has its implications and many sandwiched families – especially those from the lower middle income are caught up with the endless spiral of having to pay for a vast catalogue of bills.

“Many pay certain critical bills first and in the process owe some others hoping to balance their check book monthly against all odds in order to keep the family afloat.

“Once again, we want to thank everyone for chipping in to lighten the burden of many struggling families. Your kind efforts do not go unnoticed and those families who have benefitted from your generosity have asked me to thank you many times.

“If you have a unpaid school bill and because of that your child’s school exam certificate is being withheld, please let us know – we want to help you unconditionally.”