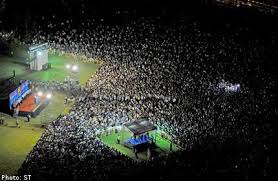 The Workers’ Party held its first rally on the night of Wednesday and used this opportunity to defend their management at the Aljunied-Hougang-Punggol East Town Council (AHPETC), an issue that has resurfaced in the last few days.

Party Chairman Sylvia Lim, who rounded off the night, dedicated her entire speech to addressing the matter, rejecting the notion that the Workers; Party had reserved contracts for friends. “Anyone can submit bid for public tender. AHPTEC isn’t reserved for friends.”

Speaking on the issue about overpaying former managing agent FM Solutions and Services (FMSS), she refuted them. “How much profit is too much? We don’t know how much the MAs in PAP are making. Is the MND saying that all town councils are supposed to check on their contractors’ profitability before confirming the contract price? Does MND do that to their own contractors?”

Ms Sylvia Lim however did point out that financial management of AHPETC has always faced some difficulties. The town council though has balanced the issue out by lowering administrative expenditure and using contestable energy and increases in revenue.

“Going forward, we are confident that the financial position of our town council will continue to improve.”

In her speech, she also question the government’s motives in bringing up the matter and said “The PAP is trying to make it painful for other political parties to succeed in town management so that the public will be afraid of voting for other parties. Is this the behaviour we expect of a first-world government?”

Mr Low Thia Kiang also spoke on this issue during his speech saying that if the Workers’ Party had committed any mistakes, they would have been investigated and be in jail instead of contesting in the elections.

Aljunied GRC’s incumbent Pritam Singh also interjected on the matter and took aim at the Town council Act during his speech. “In my opinion that the purpose of designing the town council system was for it to be turned into a political tool to arrest any wave of support for the opposition. Today it is being used again in a big way to arrest a more plural and democratic Singapore.”

He also went on to say that the town council’s structure is not as innocent as it seems.

Though the topics covered during the rally were wide ranging from issues such as the introduction of minimum wage and a through-train education programme that bypasses the Primary School Leaving Examination (PSLE) to most talked about issues such as immigration and the cost of living in Singapore, the AHPETC issue still played a big part in the rally with popular Workers Party candidates all addressing the issue.

Is the AHPETC situation really being blown out of proportion? By speaking about it as a main topic during the rally, has the ruling party instilled a sense of fear in the Workers’ Party?