The Independent Singapore News
Home News Featured News Govt invites netizens to find out if they have what it takes...

The quiz was rolled out ahead of Budget 2020, which has been scheduled for 18 February.

The Ministry of Finance (MOF) has invited netizens to find out if they have what it takes to be a Finance Minister ahead of Budget 2020.

On Monday (6 Jan), the MOF challenged netizens to take part in a quiz hosted by the Straits Times and find out whether they would know how to allocate the nation’s resources and manage Singapore’s expenses if they were the Finance Minister.

Those who participate can create their own avatar and even use their own photograph before answering questions like how they would allocate resources to help the elderly, encourage creativity, boost the birth rate, and help jobseekers and small enterprises. Participants are also asked how much surplus they would distribute back to the people.

As participants answer each question, the Straits Times microsite provides information on how past Budgets have helped the groups identified in each question. 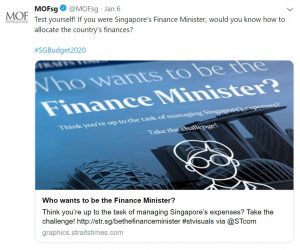 The quiz was rolled out ahead of Budget 2020, which has been scheduled for 18 February. Finance Minister and Deputy Prime Minister Heng Swee Keat branded Budget 2020 as a “strategic financial plan to address near-term and long-term issues, not just for the next year but for the years to come” earlier this year.

There is strong speculation that the impending General Election will be called sometime after Budget 2020. /TISGFollow us on Social Media