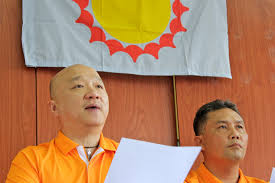 On 26 Feb 2015, the Democratic Progressive Party held its Ordinary Party Conference (OPC) in preparation for the next general elections. Secretary-General Benjamin Pwee outlined the party’s platform of being a middle-ground, centrist party, and the party brought in a bevy of fresh faces on the Central Executive Committee (CEC) and other positions.

During the OPC, Mr Pwee discussed his vision for the DPP: to build a “credible middle ground” based on a centrist platform, with the overall strategy to bring balance to local politics. He called for “collaborative politics” instead of “combative politics”, with a view towards working with the government and other political parties to find common ground on matters of national interest.

Mr Pwee pointed out that many of Singapore’s policies and institutions, such as the tripartite labour alliance, foreign policy on ASEAN, and racial and religious harmony, were also based on strong spirit of collaboration.

“The same skillset the government and the PAP has used to build collaboration and a middle ground in many other areas, should also be applied to parliamentary politics,” he said.

Mr Pwee discussed his efforts to collaborate with other political parties. Bringing up last year’s Deepa-Raya celebration dinner hosted by DPP at Zam-Zam, he pointed out that six political parties sent high-level representatives to attend, calling this a success.

Commenting on the recently-revealed Budget 2015, Mr Pwee contrasted the DPP’s approach to politics with other parties. Where other parties sought to present alternative sets of policies or criticize the government’s approach, the DPP instead focused on calling the government to actively seek feedback from various interest groups, including political parties, to feed into parliamentary debates. He called on the government to review the budget based on public feedback, and tweak it to better address key challenges.

In particular, the DPP pushed for a Budget that would create higher-value jobs for the middle- and lower-income groups; increase productivity, competitiveness and sustainability for small and medium enterprises (SMEs); enable greater investment in public goods; and implement wealth redistribution policies such as job creation, minimum wages and affordable public services. Mr Pwee hinted that the DPP’s positions on the budget would also inform its policy positions in the next elections.

Mr Pwee confirmed a shortlist of constituencies the DPP would be campaigning in. At the top of the party’s list is Bishan-Toa Payoh. Another potential target is Potong Pasir, previously the stronghold of the Singapore People’s Party but now represented by the People’s Action Party.  Should the party find more candidates, it would field more candidates and teams to contest elsewhere, including Tanjung Pagar GRC.

Over the previous months, the DPP have been walking the ground and conducting house-to-house visits in these constituencies. They learned the residents’ concerns, which were mainly municipal issues or personal concerns like employment and cost-of-living. Based on this, Mr Pwee urged the rest of his party to understand affairs at the local level, yet be able to connect them to wider national matters. He also stressed the importance of positive word-of-mouth, noting that in the last elections many younger voters managed to convince their parents and grandparents to vote for the opposition this way.

DPP member Ms Noraini Yunus assisted with these walkabouts. A former candidate for the National Solidarity Party in the 2011 General Elections, Ms Noraini hoped to be able to contribute. “I feel energized by politics,” she said, while still seeing herself as a “regular person”.

To further develop the party’s capabilities, the DPP brought in a number of new members and expanded the CEC. Acting Treasurer Mdm Juliana Juwahir was promoted to full Treasurer, while Mr Malik was brought in as a new CEC member. Mr Frankie Low, Ms Noraini and Mr Firdaus were also invited to the CEC as observers.

Ms Yap declared: “I’m here to find out what’s going on, how everything works.” At the same time, she is keen on contributing to Singapore, noting that more and more people were now holding non-conformist views similar to hers when she was younger. She also noted that due to Singapore’s small size, “people can actually make a difference here.”

The OPC lasted for one-and-a-half hours at Chairman Hamim’s residence, and included a home-cooked dinner. Everyone stayed on till almostmidnite in a positive spirit of camaraderie.
——
Story by staff-writers of DPP