The public was outraged to discover that Nanyang Technological University (NTU) held a career fair exclusively for its top performing students, last month.

Students reported that the career fair, called NTUtopia, exclusively targeted those with a minimum 3.75/5 grade point average or students from the scholar programmes. NTU admitted that the exclusive event was by-invite-only and students from the graduating cohort were selected based on their academic results and co-curricular activity records.

NTU received swift backlash from Singaporeans for not being inclusive and limiting participation based on grades. Locals were especially ticked since the Government seems to be pushing the message that Singaporeans should not be overly fixated on paper qualifications.

Last May, Education Minister Ong Ye Kung urged Singaporeans to not be “overly fixated” on the paper chase and said that employers in the new economy seek candidates equipped with skills over paper qualifications: “Skills are what carry a premium now, and skills need to be honed throughout our lifetimes.”

Asserting that degrees do not enable people to earn a living, the Minister pointed out in Parliament that it is “our ability to keep pace with changing needs of the economy is what helps us earn our keep.”

Highlighting that there should be “diverse and multitudinous” paths for people to enhance their skills, Ong trotted out academic upgrades, apprenticeships, industry certifications, overseas exposures, and work experience as such avenues for skills enhancement, before he asserted:

“It would truly be ‘unimaginative’ to confine ourselves to university education as the only way to develop to our full potential. Degrees do not define us, individually, or as a society…Our society needs to evolve, such that all occupations, crafts and trades, whether the skills are acquired through a degree education or not, are respected and recognised.”

In fact, just a few days ago, Minister Ong warned that Singaporeans will need skills beyond academic qualifications in order to be prepared for the future, to prevent “computers and robots replacing Singaporeans”.

Ong’s views seem to mirror the Government’s stance on tertiary education over at least the past five years. In 2013, Prime Minister Lee Hsien Loong said that polytechnic graduates need not just aim for university degrees since they have many good options after graduating.

Then-National Development Minister Khaw Boon Wan asserted a day after PM Lee’s remarks, that Singaporeans do not need to be university graduates to be successful and that good jobs are more important than degrees.

In a Our Singapore Conversation dialogue, Khaw said: “If they cannot find jobs, what is the point? You own a degree, but so what? That you can’t eat it. If that cannot give you a good life, a good job, it is meaningless.”

He added: “Can you have a whole country where 100 per cent are graduates? I am not so sure. What you do not want is to create huge graduate unemployment.”

This past week, several Singaporeans pointed out that NTU’s decision to reserve their career fair for top-performing students seem to be at odds with the Government’s vision.

Responding to the backlash, NTU said that it regrets making the career fair exclusive to top-performing students, and promised to open up its next career fair to be held in Feb 2019 to its entire graduating cohort.

The school will also be inviting all graduating students to upload their resumes for consideration by the 45 companies that took part in NTUtopia, by the end of October. NTU’s associate provost (undergraduate education) Professor Tan Ooi Kiang said yesterday:

“We regret that students in the graduating class were selectively invited to NTUtopia…We acknowledge that by making NTUtopia selective on the basis of academic achievements and co-curricular activity records, it may have sent an unintended message about employability factors.

“Moving forward, NTU will encourage employers to look at a broader set of criteria, such as co-curricular activity involvement and leadership, internship experience and overseas exposure…The university will also strengthen its efforts to assist students to build resumes that will help them stand out and better compete in the job market.”

While NTU has apologised for limiting the career fair to top-performers, several Government-linked companies that participated in NTUtopia have yet to comment on why they chose to participate in an event that seems contrary to the Government’s vision.

The Infocomm and Media Development Authority (IMDA) and A*Star were among the government agencies that participated as recruiters at the exclusive event.

Netizens responding to NTU’s statement of regret questioned why such Government agencies are not acting in line with what seems to be the Government’s official stance that grades are not above skills: 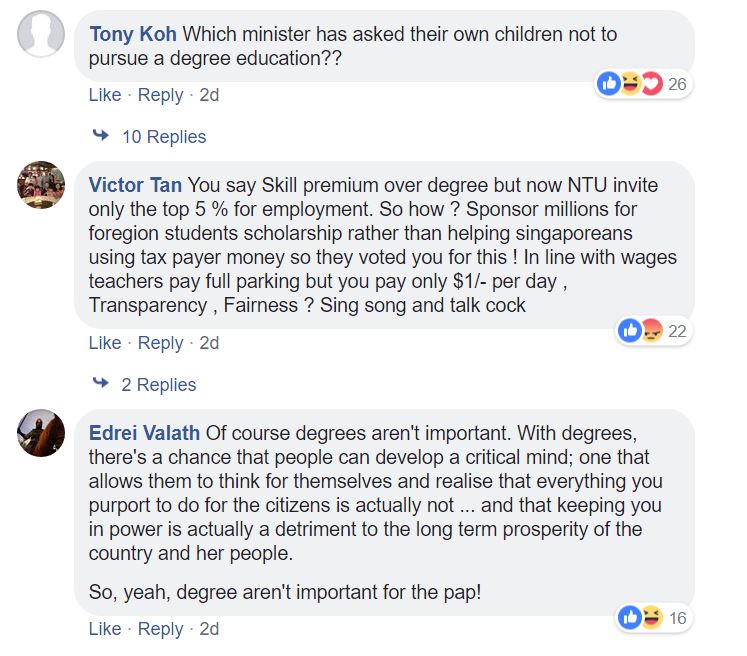