The Independent Singapore News
Home News Chinese, Malays, Indians all worked up about pork being roasted below HDB...

Chinese, Malays, Indians all worked up about pork being roasted below HDB block 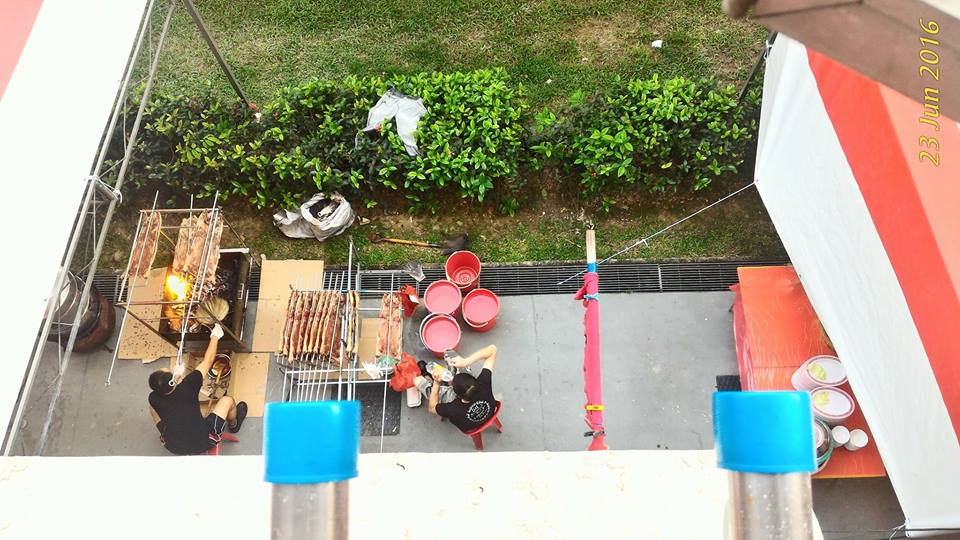 Facebook user Marnani Nani who goes by the moniker of ‘Inan Inan’ shared the pictures of pork being prepared for an event below her block. She took her town council to task for approving the permit for the cooking of the food below the block of flats.
She said that she had 8 children living with her in the flat and that the smell from the roasted pork got into her apartment. She also complained that the clothes she hung out to dry smelled of the meat.
She posted the pictures on June 24 and said that the event was below her block at 206 Ang Mo Kio St 22A. She said the smell of roast pork made her feel like puking.

Ang Mo Kio Town Council got back to the Facebook user and said:
“We are deeply sorry for the inconvenience caused to you and your family. We have advised and warned the person-in-charge regarding this issue, and will be extra mindful for future events, should similar events are booked and held at the estate once again.”
Another Facebook user Sazali Al-Totti, Marnani’s husband, shared similar pictures of the event the day before (June 23) and said: “i think it (roasting pork in the open in that manner) is disrespecting for us (Muslims) fasting in this holy month of ours.”

Sazali also asked MUIS (Singapore’s Islamic Religious Council) if this was acceptable. Several other Facebook users, many of them Malays, expressed outrage at what was done below the block of flats. They deemed that the cooking of pork like that in the open is being insensitive to the Muslim residents in the block. Some also commented that MUIS does not have the power to intervene in the matter.
At least one Chinese Facebook user also came to the support of Sazali.  Neville Teo said, “don’t expect too much being done hereafter. After all, you did say AMKTC approved it.”
One Indian Facebook user, Vignesh Dag said: “When Hindhus are fasting for Thaipusam/Panguni (Hindhu Kavadi & milkpot festival), Malay weddings have been held at the void deck of the block Im living at and cook Rendang(beef). The smell covered my entire unit as I live in the 2nd floor. Just shut my windows and stayed focused on my fasting and prayers with God. All went well. Such sacrifices are answers to God’s test during the fasting period. Wish all Muslims a plesant journey this Ramadhan month.“
Some Chinese Facebook users made some seemingly insensitive comments on Sazali’s post:
Patricia Lee: Please stay at a hotel for a month when u fast tks ! ?
Kieran Canice Kwek: Give up your Singapore citizenship! Disgrace.
Wee Hui Ting: During Malay wedding don’t cook beef because Buddhism can’t eat beef. If not we will complain.
One Malay Facebook user Naz Arjuna, chided Sazali and apologised on his behalf to people of other races:
“I think you are a backwards Muslim. Making your own Islam rules and regulations. Unfortunately for you, we are not living in an Islamic state or a country that practices Syariah law, so you have to tolerate situations like this. In Islam, you are prohibited from consuming or touching the animal itself, but everything else, is not a problem. Misinformed people like you is what gives Muslims a bad name. Malay Muslims here develop irrational fear for dogs, complaining over people bbq-ing Bak Kwa for Chinese New Year, making a fuss about Chinese funerals all because of people like you. Backwards thinking, pointing fingers and throwing racial cards are not acceptable behaviour. On behalf of my ignorant brethren, I apologize for his complaint and his broken English.”
Others like Nor Hazirah was concerned that Singaproe’s racial harmony will be affected by comments like Sazali’s:
“To everyone that isn’t Muslim, i hope this one post doesn’t affect our racial bonds as Singaporeans or at least humans. Most of us don’t represent him or the mindset that we Muslims have the upper hand during Ramadhan. My colleagues do eat/drink in front of me cause if non Muslims actions affect me so much, i shouldn’t be questioning their actions but questioning my faith or “iman”.
We tolerate and understand somehow about hungry ghost festivals, thaipusam, malay weddings etc. In anyways, let’s not curse him or anyone else that have this mindset.
“Hate doesnt drive out hate. Only love can” – Martin Luther King Jr. (:
Peace. Have a good Midweek people!”Follow us on Social Media