One of the replacement speakers, Arun Mahizhnan, has also withdrawn from the event

Singapore — After the confusion over the sudden change in speakers for a webinar sponsored by the Raffles Hall Association, because neither the original speakers nor the intended audience were informed of the switch, Professor Donald Low, one of the speakers  replaced, seems to see the upside of the whole saga.

Prof Low, who with fellow academic Cherian George recently published the book “PAP vs PAP: The Party’s Struggle To Adapt To A Changing Singapore“, wrote in a Facebook post on Thursday (Oct 29) that he was “not unhappy with the way things turned out” for two reasons: That he no longer had to speak on a Sunday evening to what was likely to be a small audience and that the free publicity generated by the fiasco had boosted book sales by more than the “lost” audience.”

Prof Low added that neither he nor Prof George, who are both based in universities in Hong Kong, asked to be invited to the webinar.

He was also “a bit cheesed off with the lack of collegiality and courtesy by the organisers who did not even email me to tell me the event has been cancelled”.

The webinar, entitled “PUBLIC DISCOURSE: Truth & Trust”, had been scheduled for Sunday evening (Nov 1), with Professors Low and George as the speakers. 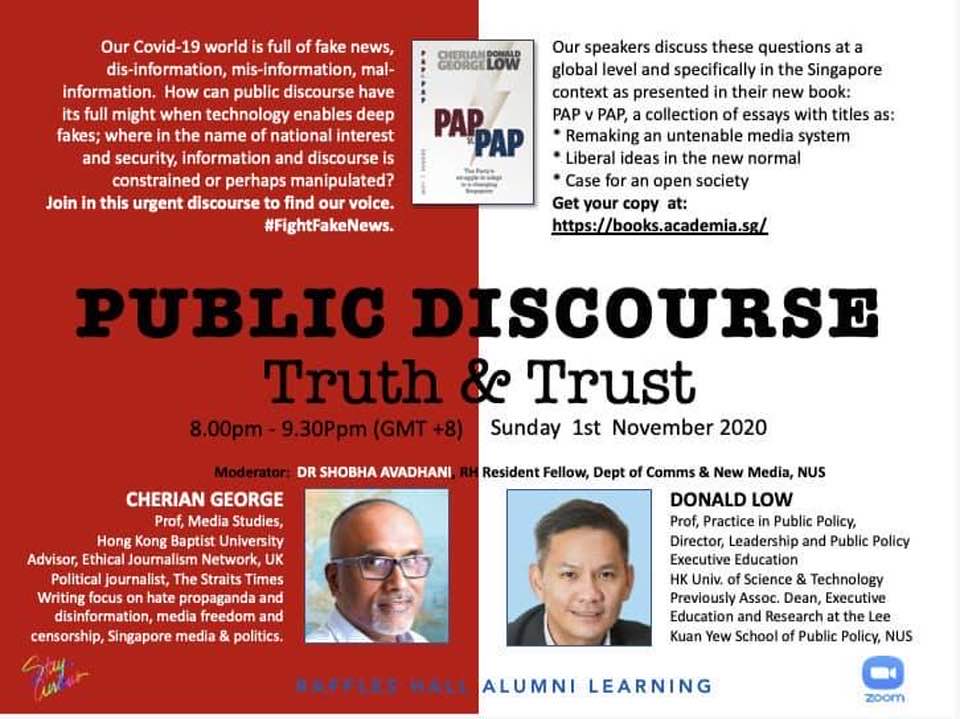 Without explanation, the line-up was abruptly changed to Mr Al Ramirez Dizon, a former journalist with Singapore Press Holdings; Ms Shobha Avadhani, a lecturer in New Media from NUS; and Mr Arun Mahizhnan, a special research adviser at the Institute of Policy Studies. 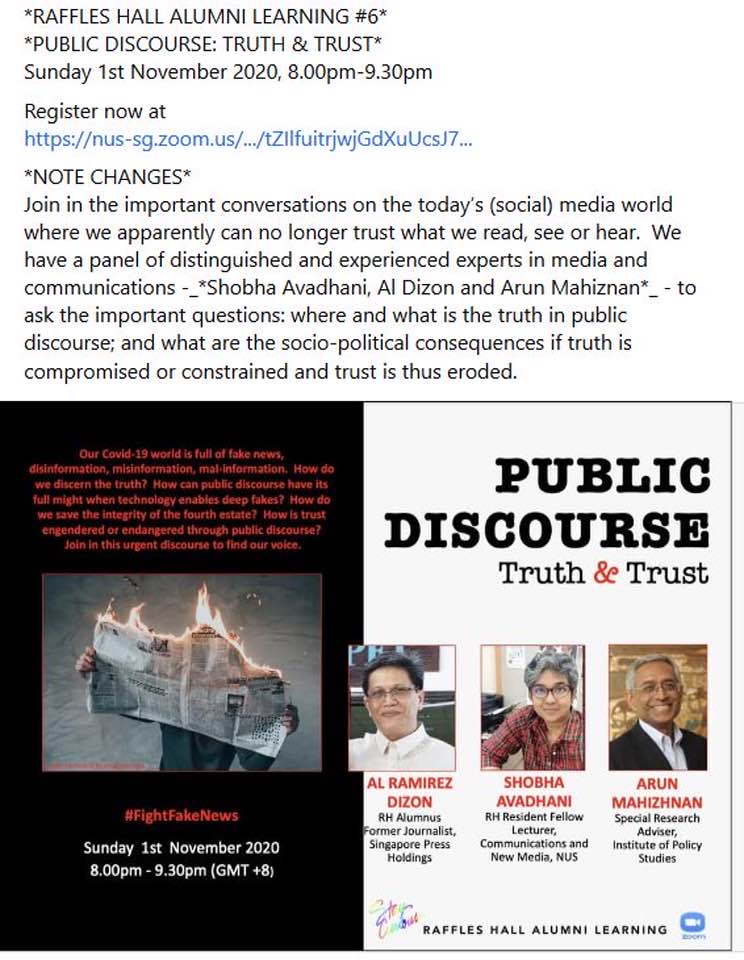 This caused confusion online as people who had signed up for the webinar wondered what had happened that resulted in the original speakers being replaced.

In the aftermath of the questions posed online, Mr Arun Mahizhnan announced that he had withdrawn from the webinar. He said in a comment over social media that he wished to let everyone know that the organiser of the forum did not give him a full briefing of what had transpired earlier and that he was not even aware that the previous arrangement had been publicised. Prof George had given him a “full briefing” on the matter, he added.

Yahoo News Singapore reported that Prof George said that he and Prof Low had been invited last month by the association. He added that “the organiser called me last Friday and told me the NUS wanted the event cancelled”.

An apology was issued to Raffles Hall alumni on Wednesday by Mr Sonny Yuen, the group’s founding president, who added that “all RHA learning events are private events for RH alumni only. As this is a closed-door community and voluntary event, the programme and its contents are developed at the organiser’s discretion”.

While Prof Low remained unflappable, he jokingly urged those who still felt “upset or aggrieved” on his behalf to “books.academia.sg.” /TISG