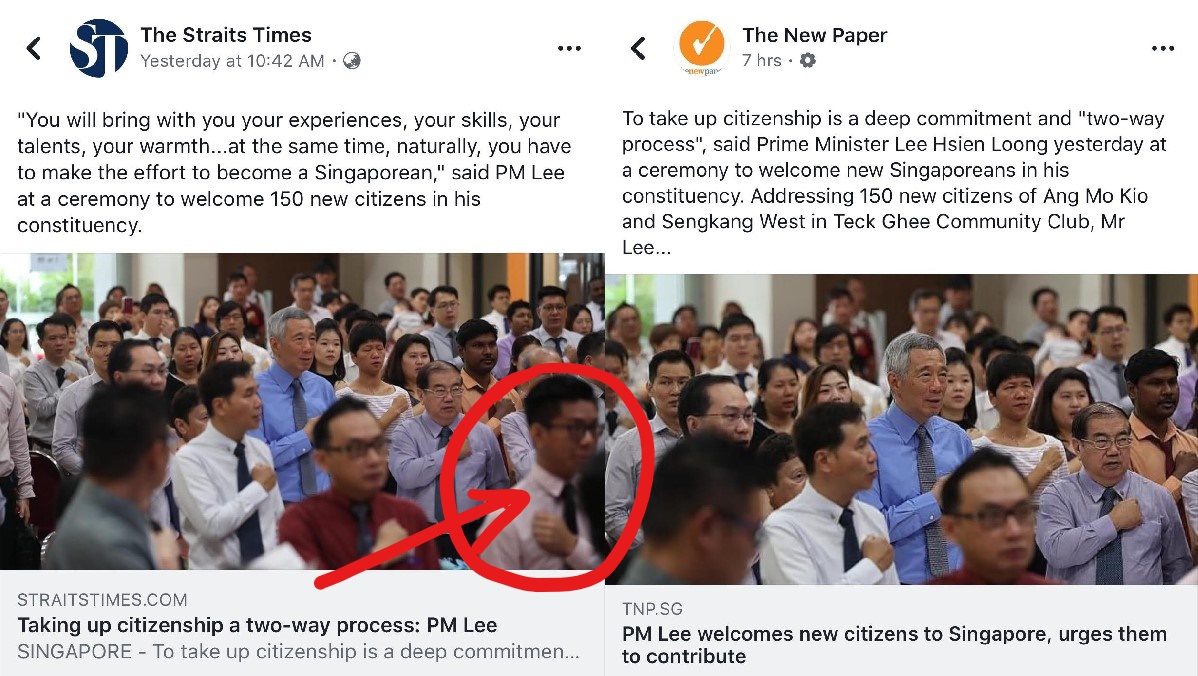 Several netizens have pointed out that The New Paper has cropped out a man who used his left hand to pledge allegiance to Singapore in a photo capturing new citizens at a recent Citizenship Ceremony.

Singapore Prime Minister Lee Hsien Loong, who welcomed 150 new citizens at the ceremony yesterday morning, can be seen standing in the middle of the crowd that appears to recite the national pledge

Interestingly, national broadsheet The Straits Times published the un-cropped picture capturing the new citizen placing the wrong hand to his chest as he recited the national pledge in its article covering the citizenship ceremony. In the article on its website, however, The Straits Times did not feature the picture at all. It instead featured three other pictures from the ceremony – one of PM Lee addressing the crowd, another picture is of the new citizens (with the man in pink nowhere in sight) and the third picture is of PM Lee speaking to a child.

The New Paper chose to feature the photo showing the man in pink but cut the man out of the shot: Both The Straits Times and The New Paper are run by Government-linked publishing giant Singapore Press Holdings.

The New Paper’s crop did not escape the notice of eagle-eyed netizens who pointed out that the correct way to recite the pledge is to place the right fist resting on the left side of the chest. Indeed, according to the National Heritage Board, “The current practice is to recite the Pledge with the right fist clenched at the heart.”

Meanwhile, some netizens have derided the citizenship ceremony on social media. PM Lee’s presence at the ceremony appears to have particularly irked some Singaporeans.

Welcoming the new citizens, PM Lee had called on them to contribute to Singapore with their fellow Singaporeans. The head of government said on Facebook:

“Taking up a new citizenship is a big decision. You must uproot yourself, integrate into a new environment, and adapt to a new culture. You have to commit yourself to a new loyalty and allegiance, to the adopted country.

“These new citizens have done that. But their journey should not end there. I encouraged them to deepen their roots here, to be active citizens, and work with other Singaporeans. Together, we can build an endearing home for everyone.”

While many Singaporeans responding to the PM’s Facebook and Twitter posts from the ceremony congratulated the new citizens, others on social media have pointed out that the citizenship ceremony was held quite close to when many expect the next election to be called.

With political analysts speculating that the next election may be called as early as next year, hundreds of netizens have sarcastically opined that this latest citizenship ceremony is simply “recruitment for the next election”: