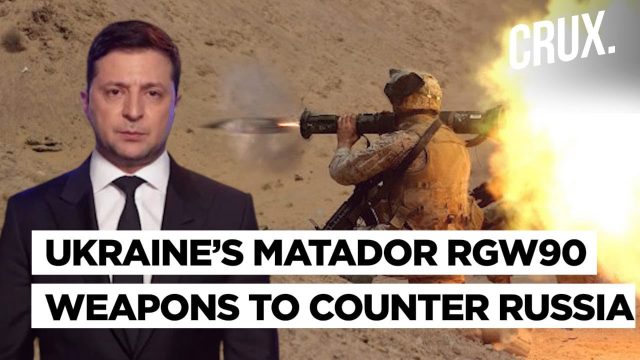 The MATADOR (Man-portable Anti-Tank, Anti-DOoR) is a 90-millimetre (3.5 in) man-portable, disposable anti-armour weapon system. And it is an updated version of the German-Singaporean Armbrust design and operates on the same principles.

Ukraine has bought 5,100 anti-tank weapons that were co-developed by Singapore, Germany, and Israel. The RGW90 HH Matador weapons were acquired from German maker Dynamit Nobel Defence (DND) at a cost of €25 million (S$37.6 million), according to Deutsche Welle (DW), citing German media.

The order will be paid for by the Ukrainian government. A total of 2,650 of the weapons have arrived in Ukraine, with the remaining 2,450 to be delivered by end-May, DW added.

The MATADOR (Man-portable Anti-Tank, Anti-DOoR) is a 90-millimetre (3.5 in) man-portable, disposable anti-armour weapon system developed in collaboration between Germany, Israel, and Singapore. It is an updated version of the German-Singaporean Armbrust design and operates on the same principles.

The development of this weapon began in 2000 and the MATADOR will eventually replace the German-Singaporean Armbrust Light Anti-tank Weapon, which has been in service since the 1980s.

The MATADOR is among the lightest in its class. The warhead is effective against both vehicle armour and brick walls. The weapon has little back-blast, making it safe for operation in confined spaces. The MATADOR is supposed to be capable of defeating the armour of the most known armoured personnel carriers and light tanks in the world.

The dual-capability warhead, when acting in the delay mode, creates an opening greater than 450 mm (18 in) in diameter in a double brick wall, and acts as an anti-personnel weapon against those behind the wall, offering an unconventional means of entry when fighting in built-up areas.

The MATADOR’s projectile is claimed to be insensitive to wind due to its propulsion system, which results in a highly accurate weapon system.

Forbes reported on 2 April that “to knock out Russian vehicles, Ukrainian teams lie in wait along roads — sometimes for days — before firing their missiles and sprinting away to their own vehicles for a quick escape.”

“That’s the basic tactic the Ukrainians have worked out as Russia’s wider war in Ukraine enters its sixth week. Ukrainian missileers packing foreign-supplied anti-tank guided missiles… have plunked at the Russian invasion force, knocking out a vehicle here and a vehicle there until the losses have become unsustainable for the Kremlin.”

Speaking to the media on 1 April at his week-long working visit to the US, Prime Minister Lee Hsien Loong said that Singapore took a strong stand against Russia’s invasion because it has chosen to uphold a key principle that corresponds to its long-term national interest – that is, the sovereignty and territorial integrity of all countries.

This position is one that Singapore has taken “consistently” over the years, he added. Asked about what he would say to Singaporeans who may be concerned that the country is choosing sides, Mr Lee replied: “We have chosen principles and we uphold principles which correspond to our long-term national interests, and we uphold them consistently.”

One of these fundamental principles is the non-violation of territorial integrity and sovereignty of nations, which is enshrined in the United Nations (UN) charter and is now “at stake” amid the ongoing conflict in Ukraine.

“That’s a fundamental principle which is vital to us because if that’s up for grabs, then what is our basis for saying we are entitled to exist, and to security and to be safe in the world,” said the Prime Minister.

“Therefore, we took a strong stand,” he added, pointing to the country’s announcement in February to impose financial sanctions and export controls on Russia.

The post 5,100 anti-tank weapons co-developed by Singapore, Germany and Israel sold to Ukraine appeared first on The Independent News.